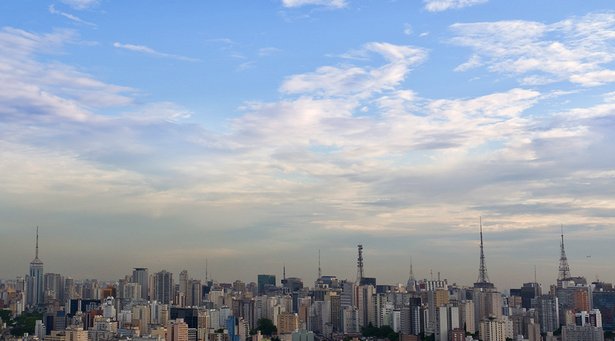 In Ableton’s hometown, Berlin, the echoes of firecrackers, joyful cheering and clinking glasses are still ringing in the streets. As Germany celebrates victory, we look to our final feature on the host country of the 2014 World Cup. Having dipped a toe into Brazil’s musical history, and spoken at length to one of its musical patriarchs - Dudu Marote, we asked Christine Kakaire to look at the cutting edge of the producer scene and what it means to make music your passion in 21st century Brazil.

Brazil's bullish economy, tropical climate, and carnival culture is a natural fit for the cash-rich commercial dance music industry. So much so that both The Economist and Forbes have dedicated articles to the topic in recent years, placing six- and seven-digit dollar values on the projected growth of the annual Rio Music Conference, and the increasing popularity of the Balneario Camboriu beach resort region. In this area, known as 'the Ibiza of Brazil', revelers flock to major clubs like Warung and Green Valley, and the commodities of VIP rooms and bottle service are proving as popular amongst tourists as they are with Brazil's rapidly expanding middle class.

Big room DJ culture has the strongest foothold in Brazilian nightlife, but from the other side of the spectrum, a more complex story is beginning to emerge; Brazil's DIY electronic music output is rivalling that of its neighbours Chile, Mexico and Argentina. Tackling the topics of inequality, inaccessibility, the heavy weight of Brazil's musical legacy, and the compromises necessitated by a life in music in modern Brazil, three of the country's most intriguing new talents offer a glimpse through their producer's eye view. 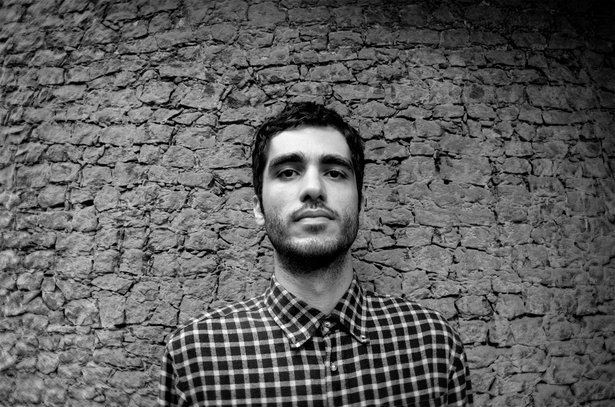 Despite being tipped as one of Rio de Janeiro's producers on the ascendant, the two defining moments of Carlos Gualda's production career have lured him outside of the country's borders. The first was when he abandoned college in favor of a three-year audio production course in London, and the second was his selection for the 2013 edition of Red Bull Music Academy, in New York City. While the latter came about on the strength of his disco-laced releases as Carrot Green for the Molotov21 label, the former was born of Gualda's sheer frustration over the lack of resources available to him in his home city. "There are a couple of courses appearing in Brazil now, but nothing particularly good, and I wanted to get a proper vision inside music," he says. "There was nothing that covered microphones, or how sound travels through the air, from the basics to synthesis and everything else that goes with music. I didn't really have any experience with recording, sequencing and all that. When I went to the UK I saw how many people were actually doing shit for themselves. In London I kind of got to grasp everything, and then I started producing more seriously and working on my personal project."

On his return to Brazil, Carrot Green saw that the easy accessibility of online production tutorials had begun to have an impact in bedroom producers. However, with further hardware-driven productions to his credit, more DJ gigs under his belt and with a critical assessment of Rio's commercially-skewed nightlife tastes, the restless producer now has his sights set on another move: "I've been playing a lot in São Paulo so I kind of get a feeling for both cities, and Rio is so far behind," he explains. "The parties are mostly 'deep house', and not in the old school sense of the word. Rio has very particular set way of things." With his relocation to São Paulo imminent, Gualda is poised to continue the momentum that he has been gathering in recent years. "I feel like a lot of people from these random parts of the globe have come into contact," he says. "It's been great that now so many more people know my music."

Lucas de Paiva and Gabriel Guerra first met during work placements at a production and recording studio several years ago, and with Guerra's artist friend, Carmen Alves, formed the trio that soon began plotting their own imprint. From their first release in 2013 – a 'Various Artists' sampler – to their ninth and most recent – the Educação Bentes EP credited to production moniker Guerrinha – the label may appear to draw on a large cast of characters, however the bulk of its output reveals itself to come primarily from the three label owners themselves. For its quirky, lo-fi quality and its commitment to vintage sounds through an oddball filter, the label has earned comparisons to labels like New York’s L.I.E.S. and Oslo’s Sex Tags Mania. Add to that their preferred mode of distribution – personalised CD-Rs – and you have all the ingredients for the cult following that is steadily gathering around them.

From their Rio base, De Paiva echoes many of Carrot Green's reservations about Rio's nightlife: "If there were people clamoring for hardware jams and strange electronic music, then we wouldn't have a problem getting shows and booking clubs," he says, "but lots of gigs seem to have lackluster turnouts, and for the most part people aren't picking their parties based on musical taste. It's a social game." De Paiva also hints at a more general mindset that may fixate on Brazil's musical past, to the detriment of its present; a point which Guerra expands on. "Old heroes here aren't just idols, they're almost like institutions," Guerra says. "Sometimes it feels that we're living under their shadows even if we're giving something from an utterly different context. Brazilian popular music history didn't give too much [space] to stimulate the average listener's head, and I'm not even talking about electronic music. I truly believe that you can get an amazing message by doing something that might look like pastiche, but this requires the listener to be prepared, to be able to give the music the benefit of the doubt. Brazilian popular music history didn't provide that much perspective on thinking about the same music with different meanings."

As for Brazil's growing fortunes, the pair acknowledge the inflexible social structures that continue to marginalise sectors of Brazilian society, despite the supposed democratising power of online technology. They offer the example of the divide between their own close-knit network (a "middle-class, white boy scene,") and their peers from other less affluent neighbourhoods as an example. "I live right near Rocinha," says Guerra, "which is a big favela and has lot of baile funk music going on, and I know like two baile funk producers from there! And it's not because of my laziness, it's proof that these social walls are still pretty strong. It's way beyond something that music and others arts can handle. The internet is only [a] means for something, it ain't no revolution, as a lot of people would like to say."

The trio have managed to harness enough of that online noise for themselves, and the end to those means has been far-reaching support from Spin, Little White Earbuds, Juno Plus, The Washington Post, and NPR over the last 12 months. Their name-your-price Bandcamp storefront is the hub of all activity, and so de Paiva, Guerra and Alves are likely to see an increase in the amount of CD-R's that they have sell, burn, stamp, doodle on, and pay exorbitant shipping prices for. It is, after all, the means to their own ends, whether their fans are aware of  it or not. "I always thought that CD-Rs are these cute underrated things," says Guerra, "they're cheap and you can draw on them, but the whole thing about releasing physical is more a reminder for the listener than a product. The strange thing is that a lot of people buy our stuff and don't want the CD because 'it doesn't make sense, [they] already have the music,' but we are a label with a message, and it is our way of saying: 'Keep it real.'" 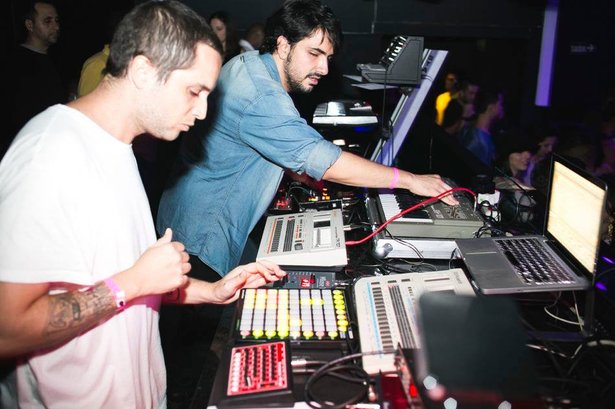 400 km inland of Rio is São Paulo, home to Brazil's foremost underground club, D-Edge. Of the club's numerous resident acts, Laercio Schwantes Iorio, aka L_cio appears regularly as a part of the Mothership night. But it's his newly-inked live improvisation duo with Pedro Zopelar that is testing the waters – and boundaries – of public performance appetites, even in relatively open-minded São Paulo. "Many people do not exactly understand our freestyle presentation format, but it's a matter of time and building a culture of live acts in Brazil," say the pair, via email. "We don't have many live acts in Brazil, but the growing movement is evident."

Iorio and Zopelar developed their studio chemistry over a two year period while producing for other artists. Finally, late last year, under the influence of live jam acts like Juju & Jordash, Minilogue and Cobblestone Jazz, they decided to create a project purely devoted to spontaneous improvisation. Each of the two brings his specific perspective to the mix: Iorio's from live techno and house compositions, Zopelar's from his jazz and Brazilian instrumental background. Their output exists primarily in video format, via a series of recorded live sessions that document the duos experiments. The pair has had to overcome various obstacles; among other things, import tax on studio and production gear that averages around 50% of the retail price, and some less than warm responses from audiences. They are happy to continue with the compromise that allows them to make a living from music; as their bread and butter they still produce with and for other artists, for fashion events and for adverts – all while continuing to develop Gaturamo and their myriad side projects.

The future looks bright for the pair, with positive responses from fellow producers and DJs. A release on D-Edge Records, drawn from studio sessions with musicians André Nardi and Soledad, is forthcoming and collaborations with modular synthesis heroes Dudu Marote and Rodrigo Coelho are in the works. "Producers want to present their work and style live," they say. "We think it's only a matter of time [for Brazil]. We are new and we are growing. Brazilians are slowly becoming part of the international circuit."