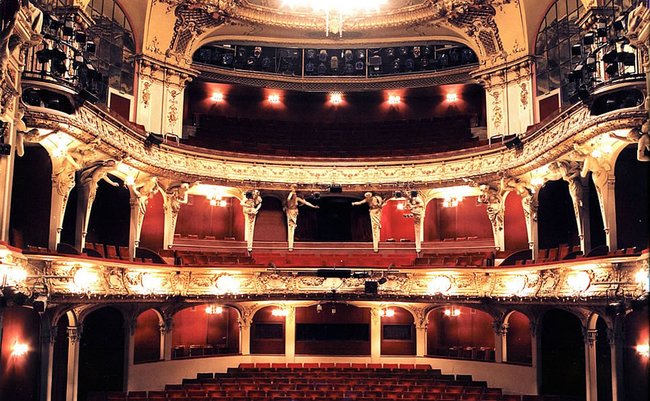 The Berliner Ensemble is a theater with a long tradition. It was the home of Bertolt Brecht and Heiner Mueller, and since 1999 it has been directed by Claus Peymann (formerly director of the Burgtheater, Vienna).

Ableton Live provided an important backstage contribution to the sound design for "Leonce and Lena," by Robert Wilson and Herbert Groenemeyer. Groenemeyer is one of the most successful German singer-songwriters of the last twenty years. Wilson is an international celebrity of the theater as architect of the unique Gesamtkunstwerk productions, which consist of space and light, costume and stage design, single actor and ensemble.

Mr. Bramann, please tell us about your experiences with Live and why you chose it for "Leonce and Lena."

Live was the best way to manage all of the requirements we had to meet. We needed something that would allow us to trigger eight tracks simultaneously, creating a surround effect for the audience. This can be done easily with Live by addressing different pairs of speakers.

The audio engineer and theater composer, Jiri Kraehahn, worked very closely with Groenemeyer during the rehearsals to create the sound design of the production. As a Live user, he used his laptop to inspire rehearsals with sounds and arrangements. Live now delivers eight tracks of the play's sound, apart from the live band's microphones and the actor's headsets. Apart from surround files, we have sound effects that emphasize the actors' movements. We used to do things like that with a hardware sampler.

Will Live be used in forthcoming productions?

We love to use it during rehearsals because of its flexibility and speed. It makes it very easy to create a sketch or apply an effect, so that you can give the director a sound example very quickly — usually they are very impatient. The different Launch Modes for samples are very valuable. Whether or not we use Live during a performance depends on the requirements of the sound design. If we have more than two audio channels, Live is the tool of choice.

What are some special requirements for equipment that is used in theater?

The essential aspects are speed, handling, reliability and simplicity. During rehearsals you can turn a blind eye, but when it comes to performance, reliability is very important. Many colleagues still feel uncomfortable using a computer in a show, but we have had nothing but good experiences triggering video with Final Cut and audio with Live.

In theater, you usually work under pressure. Therefore you must be familiar with your equipment, you must know its potential and weaknesses, and you must be able to use it quickly — anything less steals time from the rehearsal. Directors always want to have sound examples in under a second — or even BEFORE they ask for them! So, if you have to read the manual first, or if you need time to find the necessary function, you're already lost. The hard disk of our laptop is packed with sounds and samples. To be able to visualize them all in the Session View was quite a change for me, but once I was familiar with it, everything became very simple.

Thanks a lot for the interview. We wish you a full house in the future and lots of fun using Live!

As you work on developing Live, let me just say, keep on doing a great job!