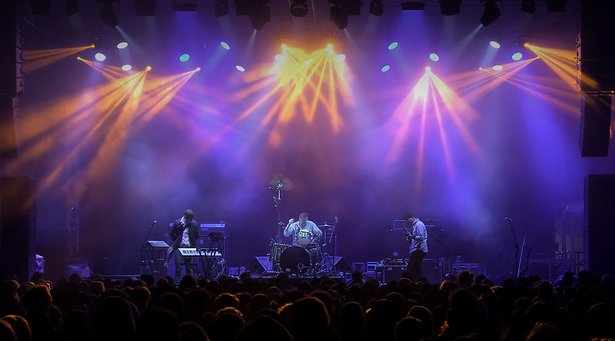 Over the course of two albums and multiple EPs, the New York City-based trio Battles have been refining their intricate, propulsive music to a degree of precision few bands ever hope to achieve. Their most recent album “La Di Da Di” is a continuation of this process and has been described as a mushrooming monolith of repetition, an organic techno thrum of nearly infinite loops that refuse to remain consistent.

Words such as these are of course poetry to our ears, and so we are thrilled to show you our Battles mini-documentary, “The Art of Repetition”. In the film, we visit the trio at their New York rehearsal space, join them in a studio in Rhode Island as they record their new album, and accompany them onto the stage in Germany for an intense live performance. Along the way, we got an intimate look inside the band’s set-up, their unique methods of composing and, most interestingly, we got to know the three very different personalities that drive the band forward.

Watch “The Art of Repetition” below, and then read our interview with the band’s guitarist, keyboard and Push player Ian Williams.

Have looping techniques always been part of your musical vocabulary?

I started doing looping when I was in my previous band, Don Caballero. We used to have two guitarists, then the the other guy quit and it was kind of like “...oh you you've got all of these shows booked, what are you going to do?” I found out about the Akai Headrush – this was like '98 – and that sort of started the whole ball for me. When Battles started up in 2002, I was still just continuing that process of experimenting with loops. My initial idea, if you listen to the earliest EPs, was to just sort of strip things down to a simpler place with the loops, so it was a lot of single note plucks like "bap-bap-bap-bap-bap-bap" not big, lush complexity. And it sort of matched the way John Stanier plays drums – this sort of minimal, crisp playing. And then I've sort of morphed into using Ableton Live. For me that was sort of a logical extension of what I was always trying to do.

But the sounds you come up with are sometimes quite complex. Do you often surprise yourself by the results you get?

I enjoy sort of almost sort of being able to mystify the process of creation. With software, it's nice the way you can actually discover a new plug-in that you put in your chain and it can randomize things, it can mystify things. Or like on Push, the way you can select different scales and have it be say fixed key or not, all that kind of stuff. You find yourself in a new situation that you didn't expect, that you're not used to, and you discover it anew. You know why I think I morphed into using Ableton Live is – away from pedals – it's sort of like pedal-land, but on steroids. You can really just infinitely loop one loop into the next loop and loop it in again, and re-loop it again and since you're inside digital land, you can really just keep going and create so many different variables.

Do you have any favorite looping techniques that you often come back to?

I like to get sort of funky with it by re-sampling the sample. You can send one audio loop, say, re-record it onto three tracks, into three clip slots, and then in those three clips slots you can play with the start point. I like to do this thing – and I've made a lot of loops using this technique – it's almost like beat-juggling as a DJ, but you're just doing the speaker on-off trick. So you're bouncing between the three loops – it's the exact same sample on all three tracks – and if the start points are slightly different you can get into some really cool dancing kind of rhythms. You can re-capture that and just keep going. And then when you add a bazillion and one plug-ins you can play with. So when you're live you can make it really happen with your clips and just be like, just do that. 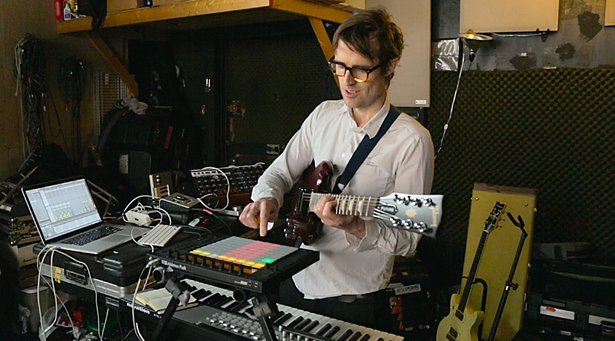 Do you see any drawbacks to having the technology play such a central role in your band?

Technology is a problem, too. And it's not only good, I mean, on the one hand when I think of when I started playing in bands in the 90's, being on tour forever and seeing bands every night I remember I would just start to get so bored – this is before the deluge of new-fangled gear and computers and everything – it was always just guitar, bass, drums, the same every night. So thank God that technology has shaken things up and has put us in this new situation. But at the same time it's like there is more of a detachment. We all know the problem; you go see cool-sounding, innovative music and you saw a guy on a laptop and then you're like...maybe I should have stayed at home and listened to it on my stereo or something. So that's the sort of up and down of it all and I think the challenge is bringing intimacy back somehow. It's what we're all trying to figure out.

Keep up with Battles on Facebook and via Warp Records.