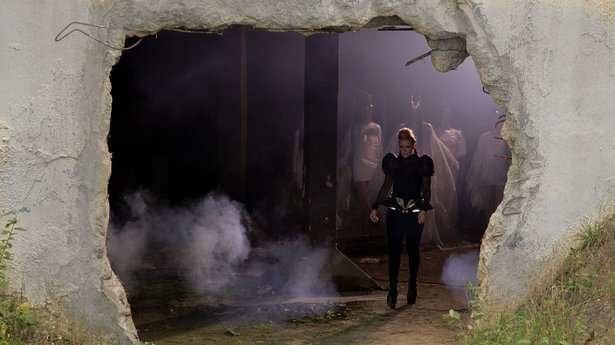 Laura Escudé is a woman who wears many hats. She’s an Ableton Certified Trainer, the founder of Electronic Creatives, a sound design company and record label, and carries decades of experience in working with sound. As a presence, however, she is unquestionably an artist, first and foremost, with a dynamic that shines through in her music - more recently, under the name Alluxe - and through her performances and music videos. We recently spoke to Laura about her history with Live, her take on the Alluxe project, and working with demanding superstar tours. Read below to learn more - plus download a free Effect Rack from Laura.

When did you first discover Ableton Live? For how long have you been an Ableton Certified Trainer?

I first discovered Ableton Live in 2005 when I was working at M-Audio in the Tech Support department. M-Audio was distributing Ableton's software back then so we would get these phone calls - "I'm trying to figure out this Ablatron program that I got with my Oxygen 8." I had to know how to help them so it forced me to learn the program - I then fell in love with it and began using it almost exclusively. I worked at Ableton as the first West Coast Product Specialist in 2007 and became one of the first Certified Trainers in 2008 after helping to develop the certification program.

For many musicians, "sound design" is an important but vaguely-defined term. As a professional sound designer, how would you classify what you do?

Sound design has meant different things in different capacities to me. A few years ago I was heavily involved in the film scoring world where I did "sound design" for feature films. In one case this meant that I found and replaced all of the sound effects in the film, in another case it meant that I created interesting beds of sound to be used alongside the music and sound effects. I have worked in theaters with "sound designers" who place the sounds in certain speaker capacities. Right now I mostly record and manipulate sounds to create something that sounds unique for my own projects.

You're a classically-trained violinist who is also a sound manipulator and beatmaker. How do your tracks usually start – on the acoustic or electronic side of things? A hybrid of both?

Nowadays I am more focused on more uptempo beat-driven music, so I mostly now start with electronic drums to get a vibe and tempo. I've been using my violin and voice along with the "Convert to New MIDI" function in Live 9 to play these melodies with a synthesizer, since I am better at coming up with ideas with these than keys. Sometimes I'll effect the acoustic stuff and layer it with the synths. It's a lot of fun.

Your Alluxe Cello Effect Rack is quite lush – lots of reverb/feedback tails and "whooshing" sounds from distortion and filtering. Can you walk me through a few typical uses of such an Effect Rack – say, in the studio and in a live setting?

The Cello Effect Rack is meant as a sound design tool as most of it is pretty atonal. It's based from all of these crazy ways that I played a cello, hitting it with various objects, making it squeak, resonate, etc. The effects are some of my favorite things that I've created, several of them I use in my live set too. It can be used in productions and compositions of all types, really great transition sounds, booms, ethereal stuff can be created from it. It's really for anyone who wants to get a little weird and different.

Prior to the latest Alluxe material, you'd forged a different sound with the album Pororoca. How do you feel that you've changed as an artist since then?

When I released Pororoca in 2010, that was a collection of music I had been holding on to for a long time, some songs up to five years. It was the first time that I got my own collection of stuff together as I was mostly releasing things with other people. By the time I put that stuff out I was already producing much different stuff, but I felt I needed to pay respect to this era where I was really into beautiful, lush, cinematic tunes. After the release I started working heavily in the hip hop world and since I have been into dance music since 2000 I decided to combine these inspirations with my moody, cinematic vibes. After experimenting for a while I came up with the Alluxe (a portmanteau of Allure and Luxe) project, to separate the work I have been doing as Laura and as a professional in the music industry. Alluxe is definitely more beat driven, dancefloor-friendly music and I am connecting more with my audience during my live shows, which feels amazing. I love seeing people move to my music; it's definitely rewarding for me to see a physical reaction which in turn helps my energy and validates what I'm doing. I recently released my first EP, Nomad, and did official remixes for Mr. Hudson, M83, Polica and New Beat Fund. I have some exciting collaborations in store.

Let's talk about your clients – there's some huge names on there. How did you get introduced to Kanye West? To M83?

Every client that I have has been a referral. I've been lucky to build quite a network over the past few years. I've been running my company Electronic Creatives since 2009 and we design and program cutting edge solutions for audio/visual performance. I get referrals and I create opportunities for other people in my network that I trust to represent me. This Fall I have shows out with Kanye West, Drake, The Weeknd, Yeah Yeah Yeahs and Sleigh Bells. It's been fun for me to grow something like this and place my favorite talents into great positions. We are also expanding into being a talent agency as I work with many artists that can bring their specialities to the live show industry and not only program the live show but perform it using the most cutting edge gear. This is the next phase for EC.

You're an American electronic dance musician whose interest in the genre far predates the current EDM craze. You've also had a front seat to watch EDM unfold with your own music and with clients like the Electric Daisy Carnival. Does anyone or anything define (the positive aspects of) EDM for you? Do you have any critical thoughts on how that scene has expanded?

I got into electronic music in 2000, after going to raves and playing violin on dance music tracks. I first got really into Trance (Sasha & Digweed), Drum & Bass (Metalheadz) and Downtempo (Kruder & Dorfmeister) music, but then I started searching for weirder sounds than I heard at most raves. I fell in love with IDM around 2002 when I heard [Squarepusher track] “Do You Know Squarepusher?” I still love that track. In 2003, I booked Machinedrum in Tampa for my first solo live show as I was obsessed with everything the label Merck put out. Back then I was a lot more picky about music, I would shun anything that I didn't feel was experimental enough.

It would be easy for me not to embrace the current EDM craze given my background, but I've become a lot more accepting of commercial music over the years and more keen on danceability. That being said, I still only frequent more "underground" events because raves are too intense for me nowadays and I still prefer weird sounds.  A lot of the sounds that people are using in the EDM world are really great though, even if I don't connect with some of the lyrics or other aspects of the songs. I find inspiration from so many different things now and am more open—I don't want to be so serious about music styles and pigeonhole genres, I want to take beauty from everything.

I know a lot of people are upset that the community isn't so "underground" anymore, but it's a really exciting time for collaborations and blurring of genres. I love seeing huge artists giving respect to more unknown artists because 10 years ago this wasn't possible. I read that James Blake was attempting to make UK influenced dubstep when he started writing his stuff and he "missed the mark" and came up with his own genre. I am embracing this infusion of the #Internet and different backgrounds as I continue to be inspired by the music that is coming out, whether it is labelled "EDM" or not.