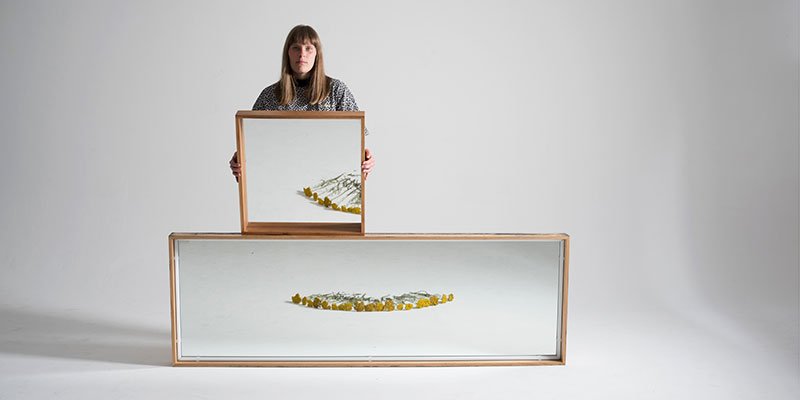 At only 25 years old, Alice Ivy’s sample-driven, hooky and danceable productions are already making big waves in her native Australia. Following a series of EPs that garnered very favourable attention, she released her debut album I’m Dreaming in early 2018 and set about fine-tuning her live set for her ever expanding audience. Chatting with us during a brief break from her heavy touring schedule, Alice Ivy shared the soulful roots of her music, her sample-centric songwriting and production methods, as well as strategies for translating home-made studio tracks into festival-ready anthems. Plus, Alice has shared a free collection of samples for you to download and use in your tracks.

By all accounts, 2018 was a big year for you with the release of your album and all the touring that followed in its wake. What kind of things did you do to translate your music for the stage?

It’s been pretty flat out since I released my debut album I’m Dreaming in February! I’ve played more than 50 shows across Australia and the United States over the past six months. The biggest thing I learned when translating my music to the stage are dynamics. For me it’s important to build a live set and to keep an audience hungry for more. The slower songs off the record have either been cut to interludes or I’ve added extra bass and drums to make them a little more impactful on big sound systems. Especially when playing late festival sets, it’s important to keep the vibe up. Working in Session View in Ableton and working with audio clip loops rather than scenes gives me the ability to work on the fly. If the crowd is really vibing a song, especially the big dancier instrumentals, I’ll extend them. This is super easy because everything in the set is warped so the only things I need to be mindful of when performing is the crowd vibe and communicating changes on the fly with my band members.

I also really focus on translating delicate moments of the record in a visual way. For example, I’ll play the lead synth parts of my recordings on guitar because it visually offers more to the audience than me hiding behind a rack of synthesisers. I’ll use audio effects such as high and low pass filters as well as a Beat Repeat on the master to keep the audience on their toes. It’s fun.

You’ve been making music since your teens but you only started producing a few years ago. What drew you to this side of music making?

I’ve been playing guitar in bands for years! I grew up playing in an all-girl soul band where we would cover old Motown hits and play some originals, which actually toured us around the world which was pretty cool. One of my favourite memories is playing the Montreux Jazz Festival at age 16, we played the outdoor main stage. I’m pretty sure I saw Buddy Guy in the crowd watching the whole set which freaked me out. I was always really involved in writing the instrumentation and song arrangement. When I got to university I was playing in a handful of bands, some of them were gigging regularly, others never left the rehearsal room.

When attempting to form a live soul band, you’re looking at recruiting a whole rhythm section, a horn section and vocalists. It was always an absolute nightmare getting everyone into a room at the same time. Writing was also difficult, there were always too many cooks in the kitchen, and that kind of music was hard to score all by myself at home with a guitar. When I got introduced to music production, particularly the performance aspect of it, my mind was completely blown. I could make the huge soul sound from my laptop and trigger everything live myself. It’s pretty selfish – I was always dependant on others, but discovering this way of creating music made me realize you don’t need a band. You can literally do whatever you want by yourself, which is wild.

Sampling seems to be at the heart of your production style – there’s often a bit of chopping and slicing applied to vocals. Are you also using samples for the ‘deeper’ layers of your tracks, the melodies, chord structures, bass lines, textures, etc?

My favourite thing to do before writing a beat is searching for different sounds and samples which make up the song palette. I’ll usually decide on a base sample, usually these days it will be a keys loop I’ll record on my Korg Minilogue (my favourite piece of hardware) or a horn stab, and then search for sounds that work with that loop. For example, I’ll look for strings and pitch them according to what key the original sample is in and continue adding layers of textures in order to create a thick, rich sound. Otherwise, I’ll find a radio vocal sample that suits the emotion of the song, to which then I’ll eventually add drums and decide on a tempo.

For bass tones and lead melodies I’ll usually play them in myself. The horn lines of  ‘Charlie’ are a mixture of a sampled saxophone I played into Ableton and an instrumental I found online. What inspired me when beginning to produce this song is that opening radio sample. It was from the 1950s post-war America period; Stepford wives, brand new kitchen appliances, the “American dream”. Charlie is a tongue and cheek homage to that period. Those vocals are snippets of an out take recording I made of Georgia van Etten just hours before she was to board a plane to the UK to live indefinitely, the lyrics don’t actually make sense!

How and where do you usually search for samples?

I don’t really have a routine when it comes to searching for samples, I just look for something that really captures my attention. I used to rip a lot directly from vinyl which is a cool method! Especially when travelling I like to visit second-hand stores and buy vinyl (usually picking the ones with the weirdest covers) not knowing what it sounds like then getting home and being totally surprised. I just took a bunch of records from my Grandma’s house (she lives in Germany) which are all warped and all tonally sound dreadful but you can get some pretty cool little sounds out of that stuff. I feel like the weirder the sample, the more creative and useful it could be, it’s so much fun making music like that. Alternatively I’ll look at field recordings I’ve made travelling, YouTube, or the internet or royalty free sample libraries. Whatever fits!

"It’s also cool to not absolutely saturate your song. If I get stuck I’ll look at different ways I can use a single sample."

What does the composition and arrangement process look like when you’re working with samples?

I’ll decide on my song palette by finding different samples, textures and tones that work nicely together. Then I’ll usually approach the rhythmic structure. So samples come first to determine the tone and feeling of the song, then I’ll look at the other elements of the song. A good example is ‘Chasing Stars’. I begun by piecing together a piano loop. Next, I layered different strings which I played in, then a Rhodes lead part, then an airy atmospheric piano sample. I pieced together an 8-bar loop removing and adding elements of the song to create a dynamic which gave me ideas for the song structure. A simple piano loop beginning, simple drum loop kicks in and then the main hook is where the strings, saxophones all kick in. The bridge goes back to everything stripped to give the song a change.

It’s also cool to not absolutely saturate your song. If I get stuck I’ll look at different ways I can use a single sample. For my song ‘Touch’ I resampled the reverb of another sample, which I put into Simpler and played out. If I get stuck, I look at what I have and how I could potentially reuse that sound.

You’ve mentioned elsewhere that you put a lot of thought into the structure of your album, with an A and B side, and that ‘flip-the-record’ pause in the middle. Is that something that comes from your own listening habits? Do you hope listeners will somehow sense this structure, even if they’re streaming the album?

I wrote I’m Dreaming with the intention of the album being listened to from start to finish as a whole, to take the listener on a journey and spit them out on the other side. I love listening to conceptional albums, the use of interludes, outros to songs, linking it all together. This certainly does come from my own listening habits. I grew up listening to A LOT of Pink Floyd, I love the Avalanches records, J Dilla, Onra, Bonobo, Jamie XX and old Kanye. It’s amazing sitting down and just listening to a whole record. That was the funnest part, piecing it all together! It was actually part of the writing process since day one.

If you come to an Alice show you’ll notice the music doesn’t stop, I love looking at the gap between songs and figuring out a way of linking them together through interludes. I was constantly thinking about this when writing I’m Dreaming. I believe listeners do understand that the record is meant to be listened to as a whole, because every song kinda ends with the expectation of something more to come.

Besides everything else you’ve been doing this year, you also taught a series of music-production workshops called Operator in Melbourne. What have you learned through this experience?

I actually love teaching music production, and will always make the time for it when I’m home and not on tour. It’s so cool when you show people stuff that really excites you, especially sampling techniques and you witness the lightbulb going off in their head, and they share that excitement with you. What’s special about the Operator series in particular is that they are female non-binary workshops – providing a safe place for people to learn and create electronic music production is something that is extremely important to do in this very masculine industry. I’m very passionate about this. On another side, I’ve also gradually learned that the best way to brush up on your production theory is to simply teach it to a class.

You also kindly made a sample pack to share with our readers. What’s in it?

I included 12 samples, mostly sourced from my own hardware. Some work together, but generally I was going for sounds and tones that I would look for in a sample pack. Generally, when I write a beat ,I look at the whole soundscape and how you can use different sounds to build something, which is why the pack has risers, some more background atmospheric stuff, some lead synth stuff, chords etc. The 'Japanese Temple' Sample is a drum I recorded in Japan with my Zoom recorder.

Download a free pack of samples from Alice Ivy

Keep up with Alice Ivy on Spotify, Soundcloud and Instagram