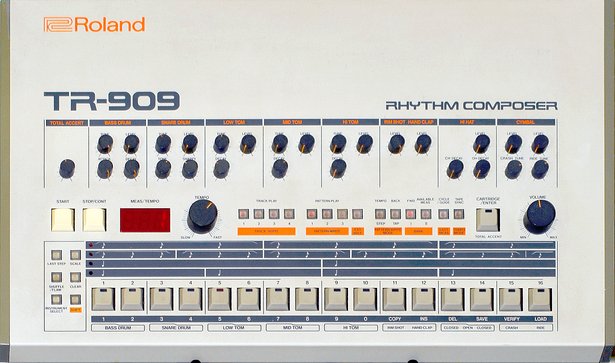 The great thing about Roland’s legendary x0x series of gear is that the numbers also lend themselves nicely to dates - earlier this year, we took March 3 and August 8 as opportunities to celebrate the TB-303 bass line synth and TR-808 drum machine. Today is September 9, or 9/09 - it’s time to check out the TR-909.

First off, get a taste of the sound of the TR-909, in this short track made with the multisampled 909 Drum Rack that comes with Drum Machines:

Compared to its younger siblings the 808 and 606, the 909 featured a harder sound - the kick was more of a “thud”, while the snares had a louder smack. In addition, the 909 was part-digital and part-analog, featuring sampled sounds for the hi-hats and cymbals.

Like other drum machines, the 909 found some favor among mainstream musicians in the mid-80s. For his hit single “Sussudio”, Phil Collins processed a 909 beat with his signature gated-reverb effect:

The real legacy of the 909, however, comes from house and techno. Larry Heard aka Mr. Fingers practically birthed deep house with his 909 tom-filled classic, “Can You Feel It”:

Despite their name, 808 State were also big fans of the 909 - listen to the hard hit of those snare fills on “Pacific”:

Meanwhile, the 909 crept back into the mainstream as vocal house became popular. Adamski’s 909-anchored instrumental “Killer” became a massive hit when he teamed up with Seal to turn it into a song. Sing along if you know it:

In the late 80s and 90s, Detroit’s second wave of producers found a harder edge by distorting the 909. As such, it became the de facto percussion sound of harder and faster techno, as on Jeff Mills’ “Changes of Life”:

Moving over to Paris, young upstarts Daft Punk made no secret of their love of the 909 - even titling a track “Revolution 909” on their debut album, Homework:

Although it’s mostly known for techno, the 909 is also a diverse drum machine with some adaptable sounds. Watch below as Radiohead’s Jonny Greenwood plays a 909 during a studio performance of “Videotape”:

The current generation of producers shows no sign of growing tired of the 909 - you can see one live with the likes of Lando and Mumdance, or hear it clearly in “Work”, a recent single from Machinedrum’s house alter-ego, Aden:

There’s some of our 909 favorites - what about yours? Let us know on Facebook, Twitter, or Google+. Got any tracks that you’ve made with the 909 Drum Rack from Drum Machines? Let us know too, and don’t forget to use #MadeWithLive.