Sound artist Robert Henke creates the tools that define his sound. Using Max for Live, Robert made the 'Granulator', which can transform any sound into a lush soundscape or a wall of noise. 'Granulator' is a sample-based granular synthesizer.

Aptly called a sound artist, Robert Henke spans the divide between musician and technician. A preeminent figure in modern electronic music, Robert and his collaborative music project Monolake have had an immeasurable influence on the sound of Berlin techno. As one of the founders of Ableton, Robert is no stranger to creating new tools for electronic music production and performance.

Creating the ultimate customized granular synthesizer has been a labor of love for Robert for more than a decade. Enter the Granulator: a granular synthesis-based sample playback instrument.

What is Granular Synthesis

Granular synthesis is a technique that involves dividing a sample into very short pieces, and then playing the pieces back superimposed and crossfaded with one another. These pieces, or "grains," are usually under 50 milliseconds long and sound like short clicks when heard individually. But when layered together, grains can produce lush textures with rich modulation possibilities.

To use the Granulator, drag a sample onto its waveform display. You can then adjust the length of the grains and the density of their overlap with the Grain control. The playback position within the soundfile is set with the FilePos knob and can be modulated randomly or via the built-in LFO.

In addition to controls that influence the playback of the grains, there are also a number of "classical" synthesis parameters such as an ADSR envelope, two multimode filters and an FM oscillator that can dramatically alter the overall timbre. 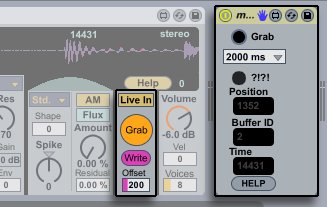 by Max for Cats

New from K-Devices, Terra is a polyphonic Max For Live synth incorporating frequency modulation, phase distortion, ring modulation and wave shaping. With its intuitive layout and characterful sound, it makes a unique and interesting addition to any musician or sound designer’s Live instrument arsenal.

Wavetable is a new synth that’s both intuitive to use and vastly capable. Stretch, shape and morph sounds into a broad sound palette using wavetables derived from synths, acoustic instruments, noise and much more. Start playing right away, or go deeper into sound design than you’ve ever been before.