Part symposium, part music festival and part workshop, the Red Bull Music Academy is always a highlight of the electronic music calendar. This year’s installment took place in New York City and, as always, featured established artists (including a few bona fide living legends such as Brian Eno and Giorgio Moroder) sharing their knowledge and experience with young, up-and-coming musicians, producers, and DJs from all around the world. Participants have the opportunity to collaborate in the studio by day and at night find fresh inspiration at the various concerts and performances that take place during the four weeks of the event.

One participant who impressed us (even prior to Red Bull Music Academy) is Simonne Jones, whose work and ideas occupy a fascinating space where art, music and science intersect. The L.A. to Berlin transplant is quite the polymath, with a resumé that seems impossibly long and varied for someone so young. We sat down to talk to Simonne about her Red Bull Music Academy experience and her (many) current projects. 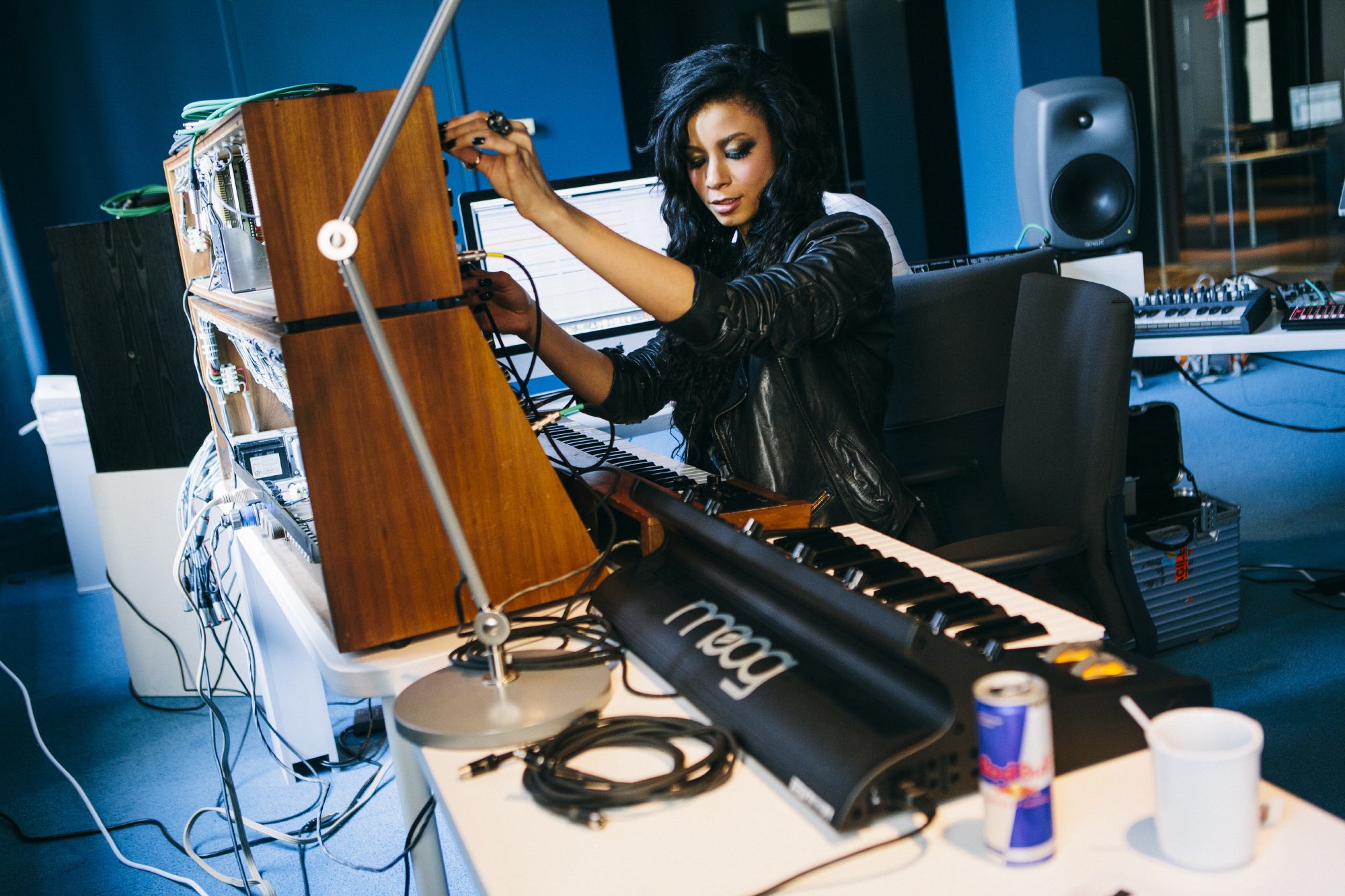 As an artist who works in quite a few different fields, is there a common thread or aesthetic approach that runs through all your endeavours?

I would definitely say two things: curiosity, I’m just incredibly curious about everything and in that curiosity I’m really fascinated with mystery, the idea of exploring things you don’t know, exploring the mysteries of the universe, I think that’s the common theme within everything.

Can you describe the MIDI-controlled LED paintings you will be exhibiting in Berlin?

There are six of them, they’re about one meter by one meter and they’re on this really thick canvas but I have all of these cut-outs with mirrors and LEDs are inside. I’m using an Arduino and a Raspberry Pi – basically open source computers, you can make them do whatever you want. They’re really cool because they’re inexpensive and people are building things like 3D printers out of them or using them to monitor the lights in their house and these sorts of things. I took motion sensors from household alarm systems and I put them in the center of the painting and – based on the formula for gravitational force by which the distance decreases between two objects and the force of gravity increases – when people are approaching the painting they become like planets, changing the gravity of what they’re looking at and consequently the colors in the painting will change. If you’re further away from the painting it just looks like a normal painting, but when you approach it, it all lights up and projects shapes onto you and the room all around you. The idea being that everyone who comes into the exhibition is a planet. Each painting kind of reminds me of nebulas and constellations so it really has that effect in the room because of the projections that it casts out. The electronics also tie into the theme of science, music, art, mystery. They’re all run by MIDI controllers and I’m using Ableton to control certain facets of them.

Do you see this as a sound piece or is there a musical component to it?

Well during the exhibition I’ll perform. I’ll probably do an electronic DJ set with very minimal singing. But it’s more about the paintings and I’ll actually play all six of them in this performance in the evening.

Another project you’re involved in is a theater production called Everyman. Can you tell us about that a little bit? It’s just you on your own providing the score to this 19th century play?

Well, it’s re-adapted from the 15th century and the I think the original writer is unknown. But it was an English morality play readapted by Hugo von Hofmannsthal in the early 1900s. I am scoring the whole thing, it’s about two hours and I wrote about 10 or 11 songs for that and in between I do atmosphere and mood and sound. I’m also playing the character “Death”, so I come and kill off the main character.

Are there a number of characters?

Yes, but the main actor is playing all of them. He plays the character “Everyman” who represents all of humanity and he comes across these allegorical figures, a character called “Beauty” and “Knowledge”, “Strength”, “Wisdom”, “Good Deeds” and “Wealth”. These are all represented by people normally but instead he’s playing all these characters and has conversations with them.

And you’re the only other person that appears in the production?

Yes, it’s just me and the main actor on stage. I’m in a little world with a bunch of instruments, I have  a grand piano, a pump organ and all my synthesizers and guitars. I use Ableton for looping and moving to and from different scenes, and to trigger different sounds. 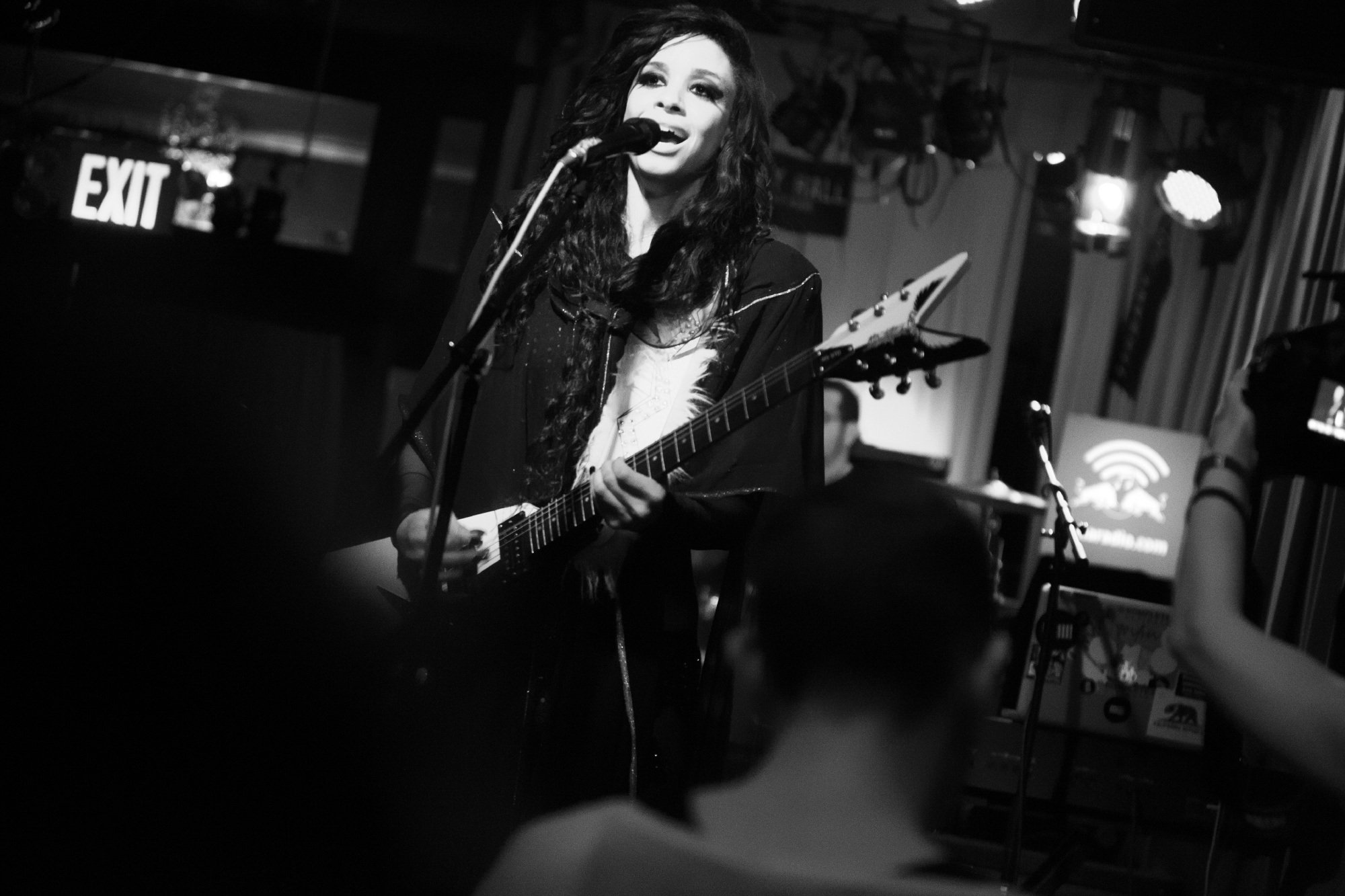 So what’s the process here? You’re picking up an instrument, recording a loop and putting it down?

Yes, I start the play. I have some lines in German and then I start creating the drums and I have two ways that I normally do this; these MIDI pads that I built onto the surface of one of my guitars and so sometimes I will play them live and sometimes I will use a keyboard to trigger the drums. Then I will loop those, and then play guitar, loop that, and then I’ll sing and start looping different vocals and build the whole song, pull out the beat at times and pull out the guitar and play synthesizers on top of that. By the end of the song it’s all recorded and I can run around and act like a crazy person.

So will you be scoring the music you expect to be reproducing on the stage or is it going to be more improvised?

I spent about a month actually writing the songs and the way that it works is that the actor will say his lines and it will lead to a climax in the play and I continue the story by song. And then he will continue the story and we go back and forth. The parts where I am doing sound design while he’s acting, like heartbeats or weird ambient sounds like the sounds of hell and these kinds of things, I have to improvise with him on stage. But the actual songs, where I’m singing and performing on stage makes it like a mixture of a concert and a play, but not really either.

It’s all your music or have you drawn inspiration from other sources?

You’re a participant in this year’s Red Bull Music Academy, is it what you expected?

No, the only thing I knew it would be is intense. I made it a point to not look into all of the people coming here and all of the events that were planned so that I would be surprised. And I think that was a good way of going about it because it’s kind of been a whirlwind.

There’s a strong spirit of collaboration here. Have you done any work on your own or is everyone working together here?

There are certain people who work on their own, but I think it’s equal. Everybody started off a little reserved, feeling each other out and getting used to each other. Now, these last few days everybody’s just in everybody else’s space, in everybody’s studio – it’s really nice.

With an album in the works, a busy touring schedule and about a million other projects we didn’t even mention here, we’re pretty sure that we’ll be hearing much more from the talented Ms. Jones in the near future. In the meantime, you can read Simmone’s own report of her work on interactive LED paintings and learn more about the theater production of Everyman.