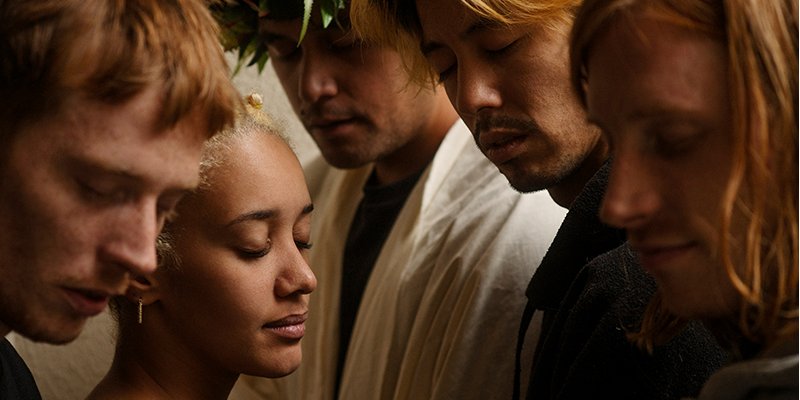 In ancient Greek plays, audiences received a steady stream of commentary from a group of narrators known as the chorus. Adding to the spectacle of live entertainment, the chorus was part of the theatre yet remained physically uninvolved in the plot. In oral storytelling however, an orator is both performer and narrator. Across global indigenous communities, the many varieties of this ancient tradition relies on dance, song and words to entertain while simultaneously educating listeners about identity, land, cosmology and much else.

Building on this ritual tradition, Parisien ensemble QuinzeQuinze enacts rich tales of social commentary, surreal landscapes, metaphysical beliefs and Tahitian culture (two of its five members are from the South Pacific island) via poetic lyrics, larger-than-life videos and live shows. They're particularly influenced by Polynesia's oratory ritual of ōrero, which they describe as a "mystical, enigmatic and pictorial" way of storytelling. "What we try to do is build stories and bring into existence characters who find themselves in dilemma situations or in situations that go beyond them," QuinzeQuinze explain. "When we sing, we can be either the voice of the narrator or the voice of a character."

There's an unworldly element to these tales, which are set against a background of psychedelic indie pop, lilting dancehall, with inflections of ambient and R&B. “PAI'PAI'”, off the 2020 LP Le Jeune, is about an army of humans who grow from the ground and drop off a cliff. "The main idea for us was to use this visual analogy to talk about our free will as a human being in our modern societies," the quintet says. One member, Julia, plays the narrator who stages the scene with the phrase "Last night in the mountain a hundred voices whispered, floating in the wind, words that I’ve never heard before." Tsi Min, another member, shares a human's point of view through the words "Sweep the dust out of my sight, had a vision, my homicide."

The mutating form of oral traditions, i.e. how stories change depending on the orator, is also a major influence on QuinzeQuinze. "Each new narrator can potentially take ownership of the story, change its form, words and sometimes play with its meaning. It fits a lot with the way we write our stories together. We always have the impression of having organic matter in our hands."

The Pacific island region is an important source for QuinzeQuinze but it's more of an inspiration than a template. The group regularly explores history, customs, folklore and various other aspects of regional culture with the purpose of challenging conventions and connecting with universal themes.

Sonically, Polynesia is typically associated with peaceful music – yet warped melodies are what define most of QuinzeQuinze's discography. Synth-heavy, looping rhythms create a cruising pace that's countered by the steel drum and suspense of traditional Polynesian percussion instruments such as the to’ere. Most tracks use gently dissonant textures and subtly shifting tempos to bend time and space. "We like to confront Polynesian culture with musical connotations that are generally not associated with it," the group described. "We don’t like to put music in cases. The music style depends on the story, the meaning and the energy that we want to put in a particular song." Still, this doesn't mean the cultural element is entirely missing. The group engages with various elements of Tahitian society on tracks such as the newly-released "Vega," which was inspired by "car bass parties" in Tahiti's valleys. The music video features a local dance known as ori deck, which is now also the name of an electronic music genre. "We drew on this atmosphere and brought QuinzeQuinze’s DNA in it," they explain.

Music videos offer a more straightforward look at how the ensemble fights stereotypical imagery of Polynesia. The clip for "Le Jeune," the title track off their 2020 EP, documents nuclear tests carried out by France in Tahiti between 1966 and 1996. Here, "a disjointed narrator presents the surroundings and its history through a series of paintings that oscillate between post-apocalyptic atmosphere and heavenly landscapes," QuinzeQuinze explained. "This video aims to present the Polynesian origins of group members Tsimin and Ennio through this sometimes forgotten episode, whose themes are less sugar-coated than the usual representations associated with the cultures of the Pacific."

Meanwhile, ōrero is a backbone of QuinzeQuinze's musical identity but while the art form transmits knowledge, the group doesn't see themselves as torchbearers of truth. Rather, they simply channel the tradition's ability to build tension between reality and fiction as well as its use of visual metaphors for abstract concepts.

Whether recounting a Polynesian legend of the world's creation or unleashing vivid poetry, QuinzeQuinze records are steeped in fantastical motifs. Their videos, often shot in 3D, not only accentuate this dystopian style, they add a dramatic urgency to the music's tropical swelter. The track "Bolero," for instance, features a dimly-lit aquarium where fish begin mirroring the emotions of disgruntled employees. It's a tad nightmarish, absurd and darkly comical—exactly the combination QuinzeQuinze sought.

"Just like in our songs where emotions mix, our visuals try to create bridges between the beautiful and the dark. The use of 3D seems interesting to us because it allows us to create entire universes. Moreover, the usual uses of 3D are so connoted that it is enough to use them in an unexpected way for the viewer to feel a loss of reference points."

On "Le Jeune," each scene presents a different stage in the spread of the nuclear explosion. Faces of group members are distorted due to nuclear radioactivity and scenes are inverted "so that the spectator understands the origin of the worrying alterations shown on screen (the radioactivity of the characters, the cataclysm of the landscapes) only afterwards," QuinzeQuinze explain. "We thought it was interesting to use magnificent and surrealist representations that nevertheless illustrate this fatal theme." Aside from spotlighting the injustices of nuclear tests on Tahiti, the group wanted the "Le Jeune" clip 'to extract the visual beauty of a macabre human phenomenon."

Production is a group effort

As a tight-knit circle of friends who grew up together, QuinzeQuinze operates like a family in the studio. Marvin and Robin are brothers while the rest met at art school, where they began dabbling in music. While group dynamics aren't always fun and games, major disputes are avoided thanks to deep trust, democratic processes and food fights – the group once flung pork chops at each other.

They have a relaxed approach to production that stems from a common musical vision. When conceptualising sounds, certain elements are usually agreed on before jamming. "We spend a lot of time talking about the stories and intentions that the music evokes to us in order to reduce the field of possibilities as much as possible.  For example, if we have a mental image of the space in which a scene takes place, it will influence the way we set the reverb settings." Once the decor and intentions are set, "everything that will be recorded or created subsequently will be a logical answer to the questions that we ask ourselves to make the song evolve towards its final form."

The composition process may start out on an individual basis but the final result is always a group effort. When beginning a track, "the impulse comes almost always from one person, and most of the time it comes with lyrics," they explained. "If Tsi Min is producing, he will try to hijack Ableton Live by looking for happy accidents. For example, assigning a potentiometer to the random search of samples assigned to a drum rack or applying unusual routings by using the side chain in gate mode instead of compressor mode."

Next, Robin may use sound recordings that could range from live percussion to vocal takes to field recordings. These will be altered via distortion, EQ or autotune until they are unidentifiable. "A lot of time is spent recording unconventional percussion objects (refrigerators, keys, switches etc.) which are then processed using resampling, pitch and a compressor. That material alone makes up 90 percent of our audio processing."

Julia, who tends to specialise in VSTs, will then look for a melodic and harmonic approach while composing. "Each time, a loop spins for hours and the texture of the sounds usually precedes the arrangement of the song," they described. "Once a general feel emerges from a loop, we go along with the mixing, shaping the sound, recording vocals and building the track." A track typically passes through every member but it doesn't always happen in a linear way. "As a counter example, we composed our last single "Vega" in almost two days all together. We started dancing as soon as the first loop arrived and we stopped when the song was over."

Much of their music contains samples of real instruments as well as recreated recordings – a method that blurs the lines between digital and analog. Steel drums, for instance, are played live but sometimes, "we use a homemade steel drum VST that we created with the Kontakt plug-in to play notes that aren’t in the range of the physical one," QuinzeQuinze explained. "To amplify this presence, we can end up mixing it with synth VSTs or acoustic instruments." On "Ta’ata noa," off their 2018 EP Neva Neva, steel drums are accompanied by a live mandolin. On "Bolero," meanwhile, the steel drum is doubled in unison with real flutes and a Prophet-10 synth preset to add power. "It’s very interesting how all those different sounds, digital or not, finally merge together."

The ensemble also likes to record sounds and radically transform them through digital processing and effects. "We use various VST effects like pitch, harmonizer, delays, distortion, chorus. We can also warp them or loop just a little part of them." Experimenting in the studio enables the group to add layers of complexity to any given track but it's a different experience when playing live. "We try to simplify, even if the shape of the song has to be modified to achieve this. At the end, we get a version more or less distant from the original."

Text and interview by Nyshka Chandran

Andrey Sirotkin: In Ukraine, Music Is My Shelter

Bringing It Back Home: How Gordi Made Our Two Skins