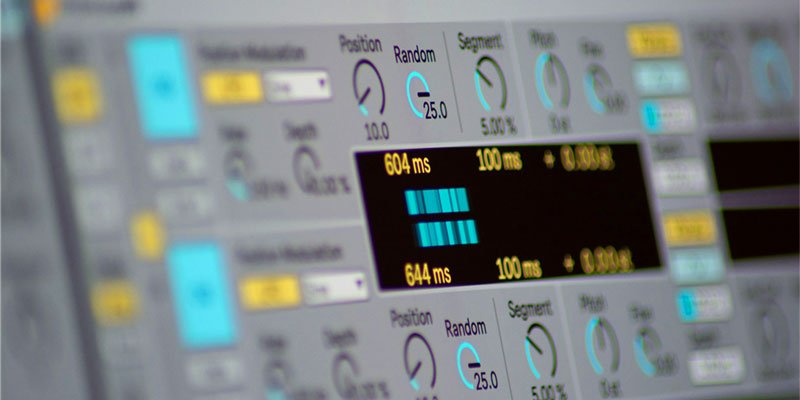 Picking up a new tool can change the way you create. You never know whether trying out a new piece of hardware, or dropping an audio effect onto a track for the first time is going to open up a new workflow, new rhythmic possibilities, or a whole new sound palette.

Live 11’s PitchLoop89 was born out of the flash of inspiration that comes with a new toy – a forty-year-old hardware effect broken too soon after arrival, and Robert Henke’s mission to create a Max for Live device in its likeness. We caught up with the multidisciplinary creator to talk about the effect that inspired PitchLoop89, the process of developing the new device, and how it can be used to transform even the simplest sound into something extraordinary.

In audio circles, the name Publison carries an air of mystique. The now-defunct company’s demonstrations are the stuff of legend – attendees at audio conventions flocked to the Publison stand to see an eccentric scat-singing Frenchman whip up chaotic sounds with a microphone and futuristic effects boxes with such alluring names as the Infernal Machine. That man was Publison founder Peter Dean, who worked alongside technical director Philippe Petitdemange to create these personality-filled effects units.

In 1979 Publison released the DHM 89 – an early digital stereo pitch-shifting delay effect. This sampling delay unit features two delay lines which hold short sections of audio, the length of which change depending on the bandwidth selected. The audio can be frozen and small snippets of sound explored in a pre-granular processing method that highlights the individual harmonic components of a sound and adds new ones.

Over the years, the DHM 89 has become a cult piece of hardware used in all sorts of music, from the phantasmagoric experiments of INA/GRM producers to Kraftwerk and Tangerine Dream’s cosmic electronics, to mainstream hits by Madonna, Chris Isaak and Cyndi Lauper.

One of the best known experimental examples of the DHM 89 is La Création du Monde, created between 1982 and 1984 by the French electroacoustic composer Bernard Parmegiani. This sprawling sonic collage depicts the creation of the world, and Parmegiani ran his source sounds through the DHM 89 to conjure the airiness of gaseous clouds mixing together before the big bang, the shimmering swirls of the early oceans and the skittering textures of first life. The DHM 89’s early granular approach can be heard in reflections of crystalline geology, the repitched chirping of insects and ricocheting water droplets, all startlingly clear and beautifully abstracted at the same time.

Grammy Award-winning producer and studio engineer William Wittman was at the height of his Publison fandom when he was working on the album that would launch Cyndi Lauper’s career, She’s So Unusual (1983). All the delays on the album are the DHM 89, including the gentle delay effect that’s ever present on Lauper’s vocals. Wittman also used it to create lush chorus effects, such as on the guitars in ‘Time After Time’ – the verse guitar sound has a very short delay, with one side pitched slightly up, the other pitched slightly down.

From hardware to software

It would be well over three decades until Robert Henke would get his hands on the hardware. The Monolake producer, installation artist, software designer and Ableton co-founder had harbored a curiosity for the Publison DHM 89 for some time when one of the units appeared on his radar at a very affordable price in 2019. “I was confident that I was gonna have fun with it, just from a theoretical level of what could be possible,” Henke explains from his rooftop apartment in Berlin, “and then it arrived and sounded absolutely marvellous – much, much better than I thought – but… it’s a forty-year-old machine. It broke after one day.”

The machine had to be sent to Paris for repair, and it became clear that it would be out of commission for several months. Already missing the transformative possibilities of the DHM 89, Henke immediately got to work on a Max for Live recreation. This task would turn out to be far more complex than expected.

One of the most difficult aspects of the device’s development was recreating the DHM’s signal-informed crossfades – Xing mode in PitchLoop89. “You apply a process called autocorrelation, which means you take the current signal and you look at the signal which you want to make a crossfade to, and you shift the signal in such a way that you get the most fitting crossfade. And they did this back in 1978 with an extremely clever technique that doesn’t even require a microprocessor, and the way it sounds is incredibly musical. It’s not always perfect, but when it makes glitches these glitches also sound nice. Trying to recreate that behaviour turned out to be far more difficult than I thought, and I wouldn’t claim that I managed to get it the same – it definitely does not sound the same. So my version definitely is different, but I’m not sure if their version sounds better, or my version sounds better – it’s just different.”

Henke made many of these calls on what aspects of his device should stay faithful to the original, and where contemporary improvements could be made. The global bandwidth settings were in place due to a RAM limitation in the DHM 89, but in PitchLoop89 they have been kept for aesthetic reasons. Switching between them creates interesting octave jumps, and in the lower sampling rates there’s a little ringing in the high frequencies, which he took care to emulate.

Technical limitations also meant the DHM 89 only has one routing option – at the highest sample rate the output from both delay lines is merged before it comes back to the input. With that limitation removed, Henke created PitchLoop89 with additional routing options that would only be possible if you were using the hardware in conjunction with a mixing desk. “Feeding the output of one channel to the input of another channel in some kind of cross-feedback configuration, this is not possible with the hardware, but it can be very rewarding. For instance, if you pitch up one channel and pitch down the other channel and you feed this back you get this constant oscillation between two pitches which is really nice.”

PitchLoop89’s modulation possibilities are another contemporary convenience. “On the hardware you have to turn the knobs constantly to get the really cool stuff, and on my machine I have two LFOs for doing these things. That makes it, of course, immediately a very different experience, and to me that’s the most significant difference, that a lot of the more advanced tricks that you could do with the hardware would require manual work, are basically part of a preset on my version.”

While LFOs can do a lot of the heavy lifting when it comes to modulation, this is a highly performative tool that shines when you get hands-on. Every parameter of PitchLoop89 can be controlled via Push, really allowing you to get lost in sound. It’s easy to spend hours twiddling feedback knobs to play between sparse glitches and shimmering cacophony, or freezing audio and slowly moving the playback position around to find different textures and tones hidden within a snippet of sound.

Just like the hardware that inspires it, PitchLoop89 can be used for out-there sound design, or as a more gentle effect. “It is fantastic as a chorus on vocals,” Henke says, “as a kind of subtle, strange, scattering reverb on drums it’s super cool. And as a sound design, soundscape, musique concréte shred machine it’s also cool.”

It’s simple to achieve a classic pitch-shifting effect with PitchLoop89. Start with a monophonic voice, set the playback position to zero and add the desired interval above or below, then start experimenting from there. By playing around with the segment length, switching Xing mode on or off, and adding some slight modulation to the position you can create glitchy, otherworldly variations on standard pitch-shifted intervals that work on a wide variety of sounds.

For ambient producers, PitchLoop89 can transform sounds into a whole new treasure trove of material. “I learned that for everything that is slow and sparse it’s interesting. So if you want to create these kinds of ambient, droney, contemporary music soundscape things then there’s a lot to explore. Send it a piano note, set a long segment time and play it forwards and backwards and forwards and transpose it and feed it into a reverb, those kinds of things are really rewarding.”

There are also a couple of bonus functions hidden beneath the surface of the device. The first is the ability to control each channel’s pitch transposition using a MIDI controller or a MIDI clip – on an empty MIDI track this will show up as a MIDI routing target. If you’re using Push, you can add some extra wonkiness to your MIDI-transposed sounds using the MIDI glide function in the last bank of controls.

Right next to the glide function in Push, Henke left in another Easter egg: “[it’s] just a test oscillator that I used when I was working on it, and I left it in because it’s kind of a nice thing to just use as a standalone instrument in this kind of drone-instrument-inspired fashion. And that’s basically the two hidden functions that are not really necessary functions of this thing, but stuff that was either already in or easy to add and I thought, ‘why not explore it?’”

Ultimately, PitchLoop89 is a device that rewards a playful, explorative approach. Henke’s final tip: “Make yourself a nice cup of tea, get yourself in a relaxed headspace, play a few sparse notes in it and experiment.”

PitchLoop89 is included in Live 11 Suite, so can be downloaded directly from Live’s browser. Live 11 Standard users with a Max for Live license can also download it in the browser.

Made in Ableton Live: Reid Stefan