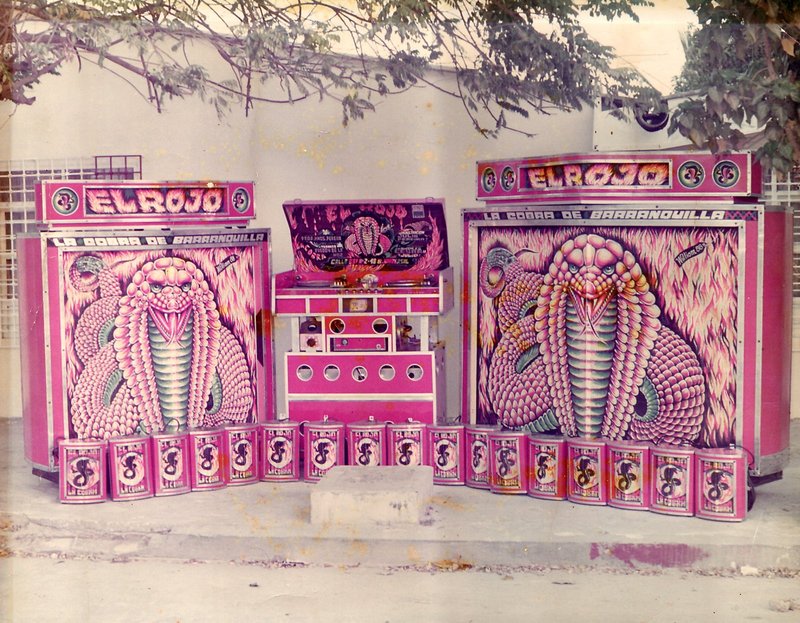 In Barranquilla, Cartagena and other cities and towns on the Caribbean coast of Colombia, huge outdoor sound systems pump lively champeta, salsa, calypso, cumbia, zouk and soukous tracks to throngs of amped-up dancers. Colorful lasers and pulsing lights zip over the crowds and illuminate psychedelic hand-drawn paintings of dragons, musicians, soldiers and otherworldly figures that adorn the speakers and stage.

Each set has its own distinctive brand (“The Monster of Sound”, “El Solista—King of the Dance Floor”) represented by these kaleidoscopic drawings. This is the picó experience: a Latin American rave-meets-Jamaican sound system party, with DJs, live musicians, and devoted organizations making it all gel. And you need a dedicated crew given the size of some of these party machines.

The picó sound system rigs range from smaller mobile DJ set ups to enormous woofer and tweeter boxes rising four rows high and several wide. Like their Jamaican counterparts, the picó phenomena began in the ‘60s in predominantly Afro-Caribbean communities on the north east Colombian coast as a means to offer locals inexpensive entertainment and play music that people loved but had little access to hear on the radio or at live concerts. The music styles played on the sets has gone through many transitions over the decades, but always featured danceable African sounds such as Congolese rhumba, afropop, zouk and soukous.

The African music link is as important to picós as the American R&B influence is in Jamaican sound system culture. African rhythms form the basis for Colombia’s modern cumbia and champeta forms. The mix you hear on picó sound systems is vibrant, colorful and cool; they fuse the unmistakable, four-four beat and guitar-driven sounds of Central and East African music, with bright Caribbean soca and percussive South American flavors. Picós sets have even spawned a number of artists, like Systema Solar, who capture the energetic aesthetic in their recordings.

"Bienvenidos" by Systema Solar - a contemporary twist on the picó aesthetic

36 year-old Colombian Harvey Cubillos saw an opportunity to bring the lively picó aesthetic to a wider audience. Cubillos, an Ableton Certified Trainer and seasoned electronic music producer, teaches at DJProductor academy in Madrid. It was there that he came up with the idea for an Ableton device that would capture the vibe, sounds and rhythms heard in picó.

We spoke with Cubillos in Madrid via Skype to learn more about Colombian picó systems and how the producer Pack came into existence.

Were you influenced by traditional Colombian music when you started making music and DJing?

No, at the time I was into future trance, techno, progressive house and dance music. I started producing music at age 19 mixing sample-based recordings with very simple soft-synths and instruments. I’ve recorded three albums, the last one, Vuelve y Engancha, came out in 2005. Since then I’ve been busy with teaching, although I still produce my own stuff.

How did you go from being interested dance music to the Latin and Caribbean genres that picó sound systems play?

A couple of years after I started DJing and producing I saw a traditional Colombian group in a small town near Bogotá. I tried to imagine how these traditional sounds would mix with dance music. Around the same time a producer friend told me that I should try and do new things with our indigenous music. I started getting into Colombian coastal music, which is very different than other parts of the country. There is a strong African influence in the Caribbean coastal communities. The combination of African drumming traditions mixed with indigenous gaita (flute) gave birth to what we call cumbia.

When did you first encounter the picó sound systems?

I was born in Bogotá, a city that is far from the Caribbean coast of Colombia, where the picó sound systems originate from. While I was producing my second album, I started to investigate about the culture of the Caribbean regions in my country. I read and learned a lot about the music, the history of the region and everything about picó systems. After visiting the coast I felt that I should have grown up in the Caribbean coast, instead of the capital city.

What is it about picó sound system sets or events that makes them special to you?

Picó systems are a representation of local music. Also, every picó is unique because each one is personalized to the DJ or musicians that control it. I love the colors, the designs and the flavor of them. They represent the evolution of the music that came from Africa to Colombia. Colombians love picó systems because, even though they originated on the coast, they represent the popular culture of an entire country. They are a representation of the sounds, music and idiosyncrasies of a region, and have been present in every local party, verbena (festival) and music show for decades.

Are they similar to Jamaican sound systems?

Yes, however, Jamaican sound systems are more portable, you can use a car to move them from a place to another. Some picó’s do travel from place to place, but most are situated somewhere local permanently, or are set up in the same location. 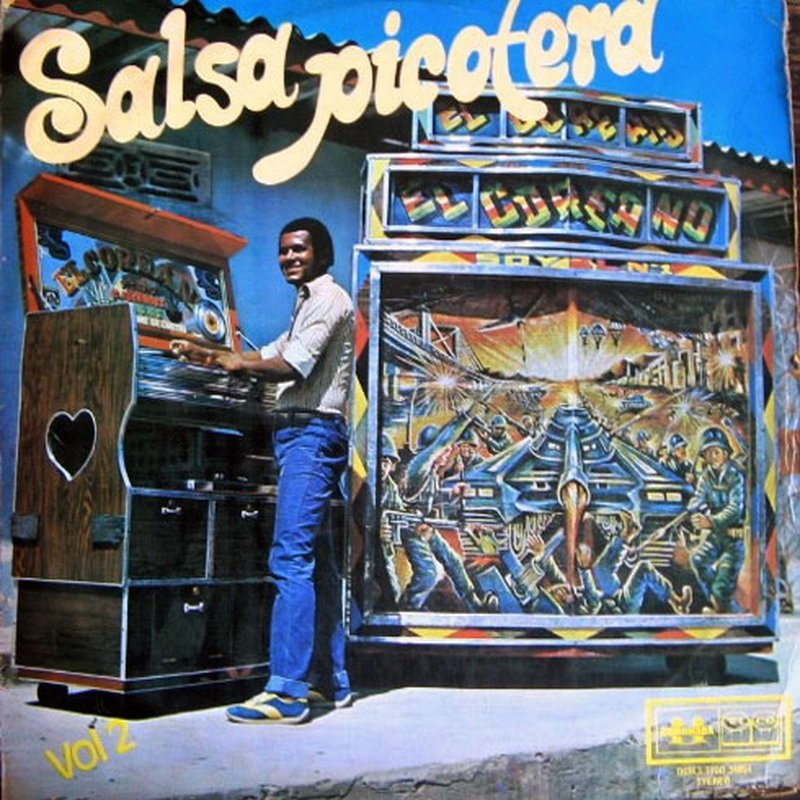 What music genres do the picó feature?

Music culture in Colombia has evolved over the decades, and likewise, the music you hear on picós has also evolved. Back in the ‘50's people liked to listen to cumbia, mabo and (African) rhumba. In the ‘60s and ‘70s the DJs played salsa, and African styles like zouk. The “Terapia” style of champeta music (a mix between soukous and Caribbean rhythms) was trendy back in the ‘80s. In the ‘90s they turned to champeta. Nowadays, picós play almost every style of modern music but the most representative ones are the sounds that I have mentioned before.

In the ‘90s, some of the musicians and DJs associated with picós started to produce their own champeta tunes.

What are some rhythms or instrument sounds that are typical to picó? How did you capture these for your Pack?

For me, one of the most representative instruments of local music – and picós in particular – is the Yamaha DD65 (drum pad). We included some samples similar to this model in the Ableton picó Pack. We also added vocal sounds from DJs and announcers from Barranquilla – people like La locura Musical, Derbi Figueroa and Abel Llinás. There are also samples of indigenous Colombian drums such as tambora, alegre and llamador.

Can you describe your creative process for putting together the Picó Pack?

As I mentioned, even though I’m from Bogotá, I’m totally in love with music from the coast. I thought the best way to combine the different styles of music was to create this mini picó Ableton device. I wanted to create a Pack that would give users an opportunity to play the picó sounds in other ways. At the beginning it was a crazy idea because picó´s are big devices with psychedelic designs that may not fit well in the Live interface. However, I found graphic designs very similar to the picós that fit perfectly with the Ableton’s design.

As I mentioned before, the synth pads were inspired by the Yamaha DD65. I wanted to make a sampler related to this drum kit, as if you were playing this instrument in a real picó. I contacted Lina Bautista, a Max software programming specialist, to help make instrument. We worked hard to make a very unique, tailor-made tool for users.

The project all came together as a very simple Ableton device, but one that is also very attractive. It includes a sequencer and three different sound banks (Traditional, Electronic and Champeta). The first bank is mostly indigenous drum samples – tambora, llamador, alegre and others. The second bank are synthesizers that I designed and created for the Pack, and the third bank are sounds typically used in champeta productions – vocal samples of radio DJs, and picó operators from Baranquilla and elsewhere.

Additionally, my good friend Gustavo Angulo is an excellent Colombian musician. I asked him to record some typical Caribbean Colombian instruments. He recorded gaitas and Caña de Millo (Millo flute), accordions and clarinets. These sounds are included in the “Roots” Packs – additional devices that complement picó system, and they really sound good!

What is your hope for this project?

The idea is to contribute to the traditional music culture of Colombia using Ableton technology. I hope people use this Pack to have fun, create interesting new things, and use Colombian Caribbean music to create happy and interesting rhythms. It’s a simple device, but you can do a lot with it!

With A Little Help From Max for Live: Free Devices for Performance and Jamming