Wavetable is a brand new instrument native to Ableton Live 10. As you can see and hear from the video above, Wavetable is capable of angelic pads, analog-style squelch, eerie sci-fi effects, and all sorts of evolving sounds, and at its heart is a new approach to wavetable synthesis. David Abravanel took a deep dive into the history of wavetable synthesis, and got some insider info from the Ableton sound team, for this primer on everything you need to know to get wavey.

At the risk of drilling the pun into the ground early, wavetable synthesis first emerged in the early 80s and quickly became a core component of the New Wave sound. First conceived by musician and technologist Wolfgang Palm, wavetable synthesis involves the use of a digitally sampled waveform, which often then evolves as it is played. The waveforms are stored in a table and a section of the wave is “scanned” to make the sound at any given moment – the segment is sometimes referred to as the “table lookup”.

Wait, so isn’t this just sampled synthesis? Let’s pause here to address a common confusion. While sampled synthesis involves the use of a static digital sample, wavetable synthesis allows for the (optional) evolution of a waveform; this is to say, while wavetable synths can sound like sampled synthesis, the evolving option (which is enabled by default on most classic wavetable sounds) differentiates it. If you want to go further down this rabbit hole, this article from Sound on Sound is recommended. 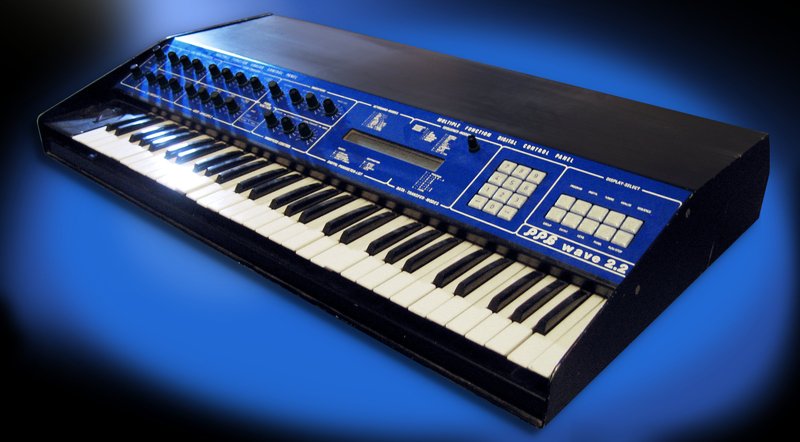 Palm made wavetable synthesis the engine behind the Wave, a synthesizer released by his company PPG in 1981. Combining this new digital synthesis with an analog filter gave the instrument a futuristic sound with a sheen of analog warmth; these options are similarly present in the many analog filter models available in Wavetable.

The PPG Wave earned a reputation as a standard-bearing synth that lasts to this day; Robert Henke (aka Monolake), who collaborated with Ableton on the creation of Wavetable, relates buying a Wave 2.3 “not because it was wavetable, but because it was the machine of choice for so many of my musical heroes in the 1980s.” Hear a classic early use of the PPG Wave on Depeche Mode’s “See You” (dig that choir!):

And check out a more modern implementation of the PPG Wave choir, on Monolake’s 2016 track “Arit”:

An Ocean of Atmospheres

With its focus on evolving sounds and ability to create alien digital atmospheres unattainable by analog synths, it’s no surprise that wavetable quickly became a go-to synth method for spacey pads, clanging sound effects, and a whole host of other ethereal sounds. Sequential Circuits – best known for the Prophet 5 analog polysynth – provided the next major wavetable leap with 1986’s Prophet VS. The VS pioneered the concept of “vector synthesis”, using a joystick to blend between four different wavetable sources.

While the Prophet VS was only around for a year (Sequential Circuits shut down soon after its debut), Korg licensed the technology for what became one of their most iconic synths, 1990’s Wavestation. With a user base that stretches from Miami Vice theme composer Jan Hammer to Orbital to Plastikman, it’s almost easier to ask who didn’t use the Korg Wavestation in the 90s. Fun fact: a C major chord on a Wavestation patch makes up the ubiquitous Mac startup sound; swim in the legacy of that silky chord on Blank Banshee’s vaporwave classic “B:/ Startup”:

Founded by a former PPG distributor, Germany’s Waldorf Music had wavetable synthesis in its DNA from the outset. With 1993’s Wave synthesizer, a new legend was born. To this day, the Wave commands high prices from collectors – though it’s doubtful that anyone loves the wave as much as Detroit techno legend Mike Huckaby, who dedicated two EPs and a sample library to the instrument. Check out the smooth, evolving chords on “Wavetable No. 9”:

In addition to the Wave, Waldorf has produced some more consumer-friendly wavetable hardware over the years, notably the Microwave and the Blofeld. The Microwave is featured prominently on “By the Lake”, by Ableton’s own Christian Kleine:

There are too many great hardware wavetable synths to do justice in one article, so we’ve focused on a few legends - but if you’re interested in learning more about the history (or doing some auction hunting), don’t miss the Ensoniq Fizmo and Access Virus series.

With the advent of more advanced plugins in the 00s and 10s, wavetable synthesis has matured and evolved to conquer new frontiers. Native Instruments’ Massive, Xfer Records’ Serum, Future Audio Workshop’s Circle, and Waldorf’s Nave are just a few of the diverse options that became available in the last decade for exploring wavetables.

One thing you might have noticed by now is that wavetable synthesis is pretty chameleon-like – unlike, say, the oscillator drift and traditional waveforms of an analog synth or the bell-like tones of an FM synth, there’s no giveaway wavetable sound. As you’ll learn when playing with the Wavetable synth, it’s precisely this flexibility that makes it so useful.

With so many classic bits of wavetable hardware and software for inspiration, what was the core goal of the designers behind Wavetable? “We spent a lot of time exploring the balance between simplicity and control,” explains Ian Hobson of Ableton’s sound team. “A goal we had in mind with Wavetable was for it to be accessible to people who aren’t synth or sound design experts, but to still offer expert-level control when needed.”

“[Wavetable synthesis is] fairly easy for people to understand, given a good set of tables,” adds Hobson’s sound team colleague Matt Jackson. “It has a very large sweet spot sonically.” “You can get lost, but in the sound, not in tons of parameters,” adds Robert Henke. “You play with it, adjust the wavetable, the envelopes and the filter till it is right, and that's it. I learned a lot from the PPG Wave in this regard.”

Inspired by the goals of accessibility and control, Wavetable’s user interface provides a “snapshot” view of what’s going on with the sound - the selected wavetables (including the current lookup position of each one), modulators and modulation routings, filter slopes, and more.

One downside of classic hardware wavetable synths was the usually tiny display – with the PPG Wave or Korg Wavestation, for example, musicians were left to navigate wavetables on sound alone. The wavetable display in Wavetable makes the sound of the synth easier to understand: “Modulating a table position is just about like playing a sample,” explains Matt, “only you can choose how fast and from where to play it without affecting the pitch. Or you can just find the right shape in a table you want to use and treat it just like an oscillator in a typical subtractive synth by leaving it alone and filtering it.”

Wavetable comes with a diverse library of wavetable sources – “we used an extremely large variety of techniques,” says Matt, “ranging from sampling analog gear, digital eurorack modules, custom Max patches just to make one table and lot of additive synthesis.” Getting wavetables right is more difficult than it might initially seem – Matt relates: “You have to get the pitch just right, you can’t have any inharmonic content that would exist between waves in a table, you have to be careful with phase and spectra.”

A wavetable derived from a piano sample

Since wavetable synthesis relies on the wavetable as an oscillator, there isn’t really one “sound” to Wavetable – rather, there’s a diverse palette of wavetables and presets from which to choose. Here’s a few examples of what you can accomplish with Wavetable – all sound examples are played using Wavetable alone, with no extra effects:

One of the features of Wavetable the design team put a lot of thought into is the modulation matrix. Providing an easily mappable overview of modulation settings, the matrix is a tool you’ll get to know for quick control. “We always wanted the modulation thought process to be, ‘I want this parameter to be modulated by this’, rather than ‘I have this modulator, I want to modulate that parameter,’” explains Matt. “We called it destination based modulation. It’s a subtle difference semantically but a really big difference to the way a sound is made and thought of.”

The modulation matrix in Wavetable

Ian adds: “Displaying the modulation information on the parameters themselves didn’t seem satisfying in the context of a Live device user interface. We didn’t want a source-based workflow so this led us towards a modulation matrix. We were worried about a modulation matrix feeling too technical so a great deal of effort went into finding a design that would feel inviting, and a workflow that would work well with the destination-oriented workflow.”

While Wavetable can go deep, you only need to get as complex as you want to in order to get great sound out of it. “We spent a lot of time exploring the balance between simplicity and control,” says Ian. “Over time we found the approach of starting a section with a minimal control set and only adding more control with a specific goal in mind. We put a lot of effort into staying disciplined when adding controls, saying no to new features until they became really necessary.”

See the other new features and improvements in Live 10.

Control Your Modular with Live 10 Suite