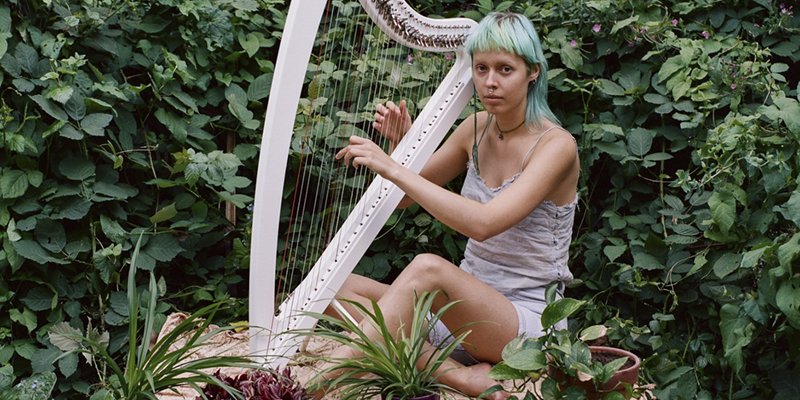 The harpist-beatmaker is an embedded part of London’s producer-inspired jazz scene: she played with rising star poet Belinda Zhawi aka Ma.Moyo at Nubya Garcia’s recent ‘Reunion’  takeover at the city’s Southbank cultural centre, as well as playing with bands including Levitation Orchestra, Sawa Manga and Calabashed with Alabaster dePlume and Sons of Kemet vocalist Joshua Idehen. She also has collaborations with vocalist Plumm, a release she also mastered. Her recently-released Loop Collection 1 is a dreamy assortment of meditative pieces that combine processed harp and dubbed out, granular electronic textures.

Osu grew up in Radom, Poland and attended a music specialist primary school, playing classical piano. “It was my favourite thing to do. I was so content doing music and I was really focused on it,” she says. “When my family moved to England I was really missing music lessons. It was a big part of my everyday life and it just got cut out.” Fortunately, her mum discovered the Saturday school for talented young musicians at Trinity Laban Conservatoire in south London and signed 11-year-old Marysia onto the programme.

At the interview, the Director asked if she wanted to play another instrument and the harp was the first thing that came into her head – and she left the room with a harp to take home for summer. “I was really fascinated,” she says. “I just wanted to get to know it.”

She stayed on the Junior Trinity programme for eight years and joined the undergrad degree programme at Trinity between 2016 and 2020, which meant she naturally ended up in bands with her contemporaries – many of whom are in Levitation Orchestra. It wasn’t until she saw New York singer and producer duendita in 2019 that she moved into production. “I was so inspired by seeing her on stage by herself and I wanted to do that too,” she says. “I was talking to [producer and Joe-Armon Jones collaborator] Maxwell Owin afterwards and he said ‘come to my house, I’ll show you Ableton, we’ll make some beats’.”

She’d dabbled in production before on other DAWs but hadn’t really felt an intuitive connection. Making beats on Ableton with Owin changed things: “I came to the realization that I really liked producing.” They borrowed Owin’s flatmate’s Push and she started making beats at home. “A big thing was discovering that I can improvise with electronic music using the Session View. For the first few months I only used Session View, and didn’t record anything into Arrange view. I played around with making different layers, different drum beat patterns, putting them in different combinations and triggering them.”

Naturally, she brought the harp into the mix, exploring the different effects. She was playing a lot with reversing harp sounds, using effects to make it into a different instrument and putting the instrument through ‘loads of reverb’ until it became more of a pad or a synthy sound. Using her contact disc mic she’d record basslines in a middle octave, tuned down, so it sounded more like an electric bass.

Osu is using Ableton Live as a composition tool, making things she can play live and then performing them with the Push. “I’m always thinking about how I can perform the music I’m making,” she says, “although sometimes I get to the point where I’ve chopped up the harp so much that it’s become a piece of production that I wouldn’t be able to perform.”

She really wanted to be able to play the harp live with the beats. “With Session View I could make each section last as long as I wanted and each time I played the piece it was different. I could be in a certain section and it was really easy to change the beat or drop a certain instrument,” she says. “Everything I do with the harp is very improvisation-based so having that freedom by myself was amazing.”

“When I started producing I didn’t know what my music would sound like. It really made me realise that everything I make is a reflection of everything I absorb in everyday life.” One of the things she has absorbed in plentiful amounts is dubstep. “I love all UK bass music,” she says. “I feel like it did influence my music, even though my music is a lot slower and softer and has a lot of harp in it. I feel influenced by the bass and the beats and the lower frequencies.”

In particular, she’s absorbed a lot of sonic inspiration from Digital Mystikz. “I love Mala,” she says. “If he’s playing I’ll always try and see him.” She saw him at We Out Here festival in 2019 playing with Outlook Orchestra. “It was the most torrential, biblical-level rain. I wear glasses and I couldn’t see anything. He played ‘Eyez’ and it was my first time hearing it, and when the beat dropped I had to crouch down on the floor for a minute.” It was, she says, ‘a pretty influential gig.’

A harp and effects pedals live set from Marysia

Pedals are a big part of her set-up, too. She always has her Strymon Big Sky reverb pedal to hand, as well as a Boss DD7 (“I love it for the reverse delay, which works so well with the harp”), a Line 6 DL-4 delay, which also has a reverser, and the Electro-Harmonix Micro POG octave pedal. “It makes the harp sound like an organ and it gives it a really strong attack. It’s useful when I’m playing in a band and want the harp to cut through.”

Recently she’s been using her effects pedals and Ableton together. “I always used to have my pedals on the floor and now I have them within hands reach so I can change the parameters as I’m playing to make all kinds of spacey sounds.” When she’s performing solo she has the harp going through FX pedals into Live. How does this make her harp sound? She pauses. “Pretty huge and awesome. The harp already has so much reverb naturally, when you pluck a string the sound keeps going. Combining that with effects pedals and you build layers and layers of texture.”

Her live collaborations with poet Belinda Zhawi show how the combination of harp and production creates a real sweet spot. “We get into such a deep zone together,” she says. The pair met five years ago when they were both invited to join south London duo Sawa Manga as guest performers at an early edition of Brainchild Festival, itself an important and community-focused part of London’s musician-powered underground. Zhawi had got a SP404 to add ambient samples and field recordings that would complement her equal evocations of concrete London and her Zimbabwean childhood. Osu used Ableton to combine beats into their performances, alongside her harp and effects. It really worked, with Zhawi’s deep, minimal tones amplified by Osu’s ultra-sensitive sound world.

Is the harp ready to be expanded into sonic worlds that go further than what you might call ‘angel sound?’ “Yeah, definitely,” she says. “I am a sucker for the angel sound, and combining that with electronic music. A lot more harpists are using effects pedals now, and exploring different ways they can make their instrument sound. There are so many extended techniques, timbres and colours the harp can make even when it’s acoustic, so combining it with electronics can expand it so much more.”

Osu’s beat-making began with friendship and collaboration and it continues in the same vein. “I’ve learned so much from friends. It makes it a really communal thing, just to experiment and teach each other stuff.”

Made in Ableton Live: Afriqua