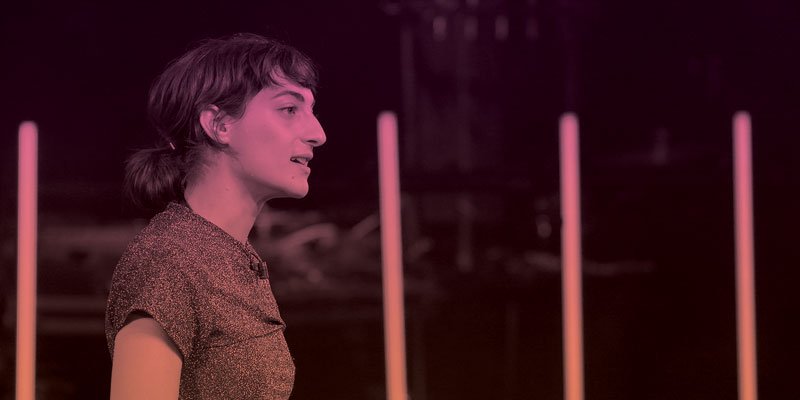 Lea Bertucci plays her saxophone, accompanied by subtle electronics and field recordings flown in from ancient cassette players. The room is filled with shimmering, dancing sound-patterns, constantly in motion, yet strangely calm – like sunlight reflecting off a lake in a slight wind, or a dawn chorus of birds. The set-up and sound palette suggests New York in the sixties – and Bertucci is certainly in the tradition, citing La Monte Young as an influence, among others. But if this is minimalism, it’s not the smooth clockwork of Philip Glass or Steve Reich, more the ecstatic maximal-minimalism of Young and Marian Zazeela’s early drone performances, or Bertucci’s other favourite, Julius Eastman. Not long into the performance, I lose all sense of how long the show has been going for, and a little bit after that, time itself starts to go wobbly – speeding up and slowing down like a tape recorder with a bad motor. When I describe these symptoms to Bertucci, she nods, like a doctor hearing the well-known side-effects of the medication she’s prescribed. “There’s no reliable beat in my music”, she explains, “and no conventional chord progression or melody. I think it does have the potential to really mess with people’s perception of time.”

Bertucci has been preoccupied of late with ‘4-Dimensional Composition’ – a field of music making which, she cheerfully admits, she made up. “It’s not a real thing”. But it’s a good way to describe what she does, a holistic approach to playing and composing that takes account of both time and space, asking us to consider not only the order in which musical events happen, but the height, breadth and depth of the rooms they bounce around in. In particular, Bertucci is fascinated by the relationship between music, architecture and the human sensorium; the way sound behaves in space, and how a listener’s position influences what they hear; “the subjectivity” as she puts it, “of musical perception.” And while her dedication to this discipline-for-one has seen her play and compose in some extraordinary places, from an underground lake in upstate New York to a nuclear plant in Stockholm, the thinking behind it is also a useful framework for an everyday music practice. After all, whether we’re staring at arrangement view, writing dots on a stave, or tapping out beats on a Push or an MPC we are, to paraphrase Alvin Lucier, sitting in a room; and rooms, as Virginia Woolf reminds us, come in many, many shapes and sizes.

“The resources of the English language would be much put to the stretch, and whole flights of words would have to wing their way illegitimately into existence, before a woman could say what happens when she walks into a room. The rooms differ so completely, they are calm or thunderous, open onto the sea, or, on the contrary, give on to a prison yard; are hung with washing; or alive with opals and silks; are hard as horse-hair or soft as feathers…”

Likewise, the 21st century composer would quickly exhaust her thesaurus trying to describe the variety of rooms she has to record or rehearse in, or the ones she encounters on a medium-sized solo tour of Europe. The rooms are boxy or cavernous, blessed with nice acoustics or plagued with unruly reverb tails and weird reflections. It was this great smorgasbord of venue architecture that led Bertucci to start considering space as a compositional element in the first place. “One of the ways that I got interested in that aspect of music-making was from touring and playing in all sorts of different venues that had very different kinds of acoustic conditions, and seeing how radically different my sounds would be. So it was a thing that I kind of cultivated through the practice of touring. I noticed that improvisationally it would really just change the way I approached my instrument, like what kind of notes I would gravitate towards. The space and the acoustics would have this very direct impact on what I was playing.”

When promoters gave her lemons, Bertucci made lemonade. Soon, she had reversed the process, intentionally seeking out what she calls “extreme environments” to push her playing and composing in new directions. At Loop 2018, Bertucci gave a talk about her most ambitious excursion yet – a site-responsive composition performed inside the enclosed hollow body of the Deutzer Brücke in Cologne, a 437 meter single-span concrete bridge crossing the Rhine river. The piece was scored for groups of musicians ranged around the space – as they played, Bertucci captured fragments of their sound and threw them back into the mix. Meanwhile, both players and listeners were moving, and this movement too became part of the piece; the sonic environment of the bridge was such that even a small footfall or slight shuffle could become a major sonic event. “It has a very extreme acoustic condition where there’s about fourteen seconds of decay, and all these other interesting phenomena, like reflections and delay and acoustic shadows. So I wanted to write a piece that took advantage of these qualities.”

To hear Bertucci describe the process of writing and realising the piece is to enter a happily topsy-turvy world, in which all the things that usually drive performers and sound engineers out of their minds – uncontrollable reverb, trams rattling overhead, feedback – become the very stuff the work is made from. For example, the bridge’s ‘room tone’ (the predominant frequency at which the space resonates, causing feedback), became not a restriction to work with, but the foundation of the whole piece. “I’ll do a sine wave sweep from very low to very high”, she says, by way of explaining how it’s done, “and from the analysis recordings of that I can determine where the room tone is, and use that as the fundamental pitch of the composition. I’ll use that as the harmonic basis, and then look at what the harmonic series is up from there.”

If you’re tuning with a plug-in or a youtube video, chances are you’re tuning to Equal Temperament, in which the 12 notes of the western scale are placed at equal points along a frequency spectrum, where the note ‘A’ sounds at 440hz. If you’re tuning to the room tone of a half-kilometer long concrete bridge, you’re operating in a world of physical properties and dancing air molecules that don’t give a hoot about Equal Temperament or any other system of tonal relationships devised by humans. These relationships are purer, in a mathematical sense, but because we’re so habituated to ET, they often sound ‘out of tune’. Bertucci admits that her work often strikes people as dissonant for that reason; but she’s not troubled by it – for her, composing off the grid is not just a matter of personal preference, but a necessary subversion of the norm.

When I ask if working with room tone and environmental sound has changed her relationship with noise, she insists that nothing much has changed – they’ve always gotten along well. “I mean, I consider myself a noise artist”, she explains. In fact, she began using the bass clarinet because, unlike the saxophone, which she’s been playing since she was nine years old, she found she could approach it simply as a noise-making tool. “I came out of the experimental underground noise scene. So I always felt that noise and incidental sound is a very powerful tool… to really challenge people, to question their threshold of what they are and are not able to tolerate.” Tuning in to our noisy environment, she insists, is about “redefining your relationship to the world, and reconsidering the sounds that exist all around.”

This process of reconsidering and redefining is at the heart of everything Bertucci does – whether she’s conducting an ensemble in the guts of the Deutzer Brücke, improvising patterns on her sax in a small club, or recording birds outside her window, Bertucci is listening attentively to her sonic environment and thinking carefully about what – if anything – she wants to add to it. She likes to use the term ‘site-responsive’ to describe her work – and takes care to distinguish this from the more commonly heard term ‘site-specific’, which, she admits, annoys her. “I have a lot to say about ‘site-specific’!” she laughs. “The term was coined by Robert Smithson and Nancy Holt and a lot of the very early earthworks artists who were creating works that depended on the site. In my work, I like to make a distinction between site-specific and site-responsive works. Because something that’s site-specific cannot be understood if you take it outside of the context of that site.” Bertucci has released recordings of her site specific works, including “Cephaid Variations” and “Double Bass Crossfade”, but insists that, properly speaking, they only existed as such in the location they were performed. “Practically”, she says, “it means that the piece has a very short existence. Unless you get Dia foundation to fund you for the rest of your life!”

Bertucci’s crack about Dia – the arts foundation that poured seemingly endless oil money into projects by La Monte Young, Walter de Maria and Donald Judd in the seventies – reminds us of the economic reality behind art-world buzzwords. Who, apart from the very rich, or the very lucky, has the means at their disposal to be ‘site-specific’, anywhere, (let alone in Betucci’s home, New York), in 2020? No-one, that’s who – the rent is too damn high. And if empty or abandoned architectural spaces abound in America’s post-industrial cities, that doesn’t mean you can just stroll into them and start planning an octet for brass – although Bertucci sometimes gives it a shot anyway. “I’ve gotten in trouble for trespassing”, she admits.

But if we can’t afford to be site-specific, we can’t afford not to be site-responsive – and in any case we can hardly avoid it. In her book, Recording Unhinged, maverick rock producer Sylvia Massy reminds bedroom producers not to dream their lives away waiting for a ‘good studio’. “As luck would have it, wherever you are is probably a good place to record. Your recording environment becomes an effect, an additional instrument. Use the space – the ambience is real and alive!” Reflecting on his time spent running the recording studio at London’s Total Refreshment Center, producer Kristian Craig Robinson insisted that the building’s rough, urban acoustics were an essential part of its sonic appeal. “I hated the whole thing of recording studios being out in the woods”, he told Emma Warren. “The fact that this place was concrete and was in Hackney and had steel girders meant it would sound like London.” Calm or thunderous, soft as feathers or hard as horse-hair, the recordings we make and the shows we play are also documents of places; their height, depth and breadth contributes more than we might think to their movement through time. 4-D composing might be something Lea Bertucci made up, but it is, nevertheless, a real thing.

Keep up with Lea Bertucci on her website and Bandcamp.