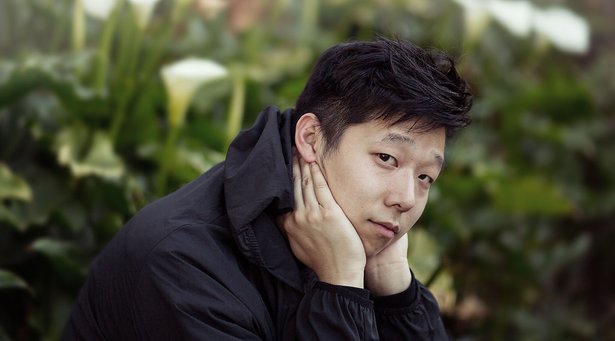 Many a bedroom producer dreams of eventually being able to make a career out of the music they were already more than happy to create whether or not there were any paychecks involved. Charlie Yin was one of those producers, crafting beats in his free time simply because he loved making music. But somewhere along the way, the Bay Area native's Giraffage project took on a life of its own. After first establishing his name with a pair of self-released albums and a steady stream of playfully party-minded edits and unofficial remixes (most of which dropped while he was still a student at UC Berkeley), the last two years have seen Yin become one of the fastest-rising Stateside beatmakers in the scene. Giraffage's particular brand of pop-streaked, richly melodic productions has landed on labels such as Fool's Gold and Dim Mak, while simultaneously making him a highly sought-after remixer and paving the way for him to play festival stages across the globe. In other words, Yin's beats have made it pretty far outside his bedroom.

Now, in the midst of what has been a rather busy period for Giraffage, we asked the currently San Francisco-based artist to carve out a few minutes to talk shop with us. Still very much a bedroom producer at heart, Yin graciously fielded our inquiries and offered some keen insight into his creative process, explaining how his production approach has evolved over the years, how he translates his tracks into the live realm, and how he goes about writing the sugary sweet melodies which have helped define Giraffage throughout his steady ascent.

How do you typically begin working on a new track?

Do you set aside certain times to sit down and make music, or do you tend to work on tracks only whenever the inspiration strikes?

I don't really try to set aside chunks of time to work on songs. [My desire to make music] is still pretty much a result of me having a lot of fun when I make music, so I'll just do it whenever I can. It can be a bit different now than when I first started the Giraffage project, in the sense that there are a lot more deadlines and times where I have to have things done, but creatively, I think the process is still more-or-less the same [for me]. These days, I don't have as much time as I used to, because I'm going on tours and stuff like that, but at the end of the day, it's really just about me having fun, and I hope that never changes.

How do you go about implementing drum sounds? Do you have a library of samples you choose from? Do you sample records or real-world sounds ever?

I have a big library of go-to sounds - if I'm ever feeling stuck, I can always refer back to that library for tried-and-true drum sounds I've used in the past. I built that library up by doing a lot of sample pack hunting, grabbing things from Vengeance sample packs, Sample Magic sample packs, and random packs I would find online. I once found this crazy, maybe 15 GB folder where someone had sampled every hit from a giant collection of analog drum machines; I've definitely spent many hours digging through that too.

Do you do a lot of tuning of the individual drum sounds in your tracks?

Yeah, I definitely do. If it's a kick or something low, I'll usually tune it to be in the key of the song, but if it's something with a noteless timbre (like a clap), I'll tune the sample up or down depending on what frequency range I think would work best within the song I'm working on. Tuning drum samples is such a subtle thing to do, but it can really make a song sound so much tighter.

How do you approach using non-drum samples in your tracks, things like vocal snippets, or in the case of "Hello," dial tones and modem sounds?

Usually when I'm working with samples, I try to work them into an existing song idea, rather than working a song around a sample. If a certain part of a song needs a little something more, I always think throwing in little bits of samples here and there can help spice it up. Sometimes I do end up building a song around a sample, but for the most part, I usually have a solid structure down before I start throwing in weird dial tone samples and stuff like that.

A lot of your tracks stand out because of the strength of their melodic content. How do you go about writing your melodies? Are you playing them in using a MIDI controller or do you write them in with a mouse?

I try to jam out melodies more than clicking them in. I have a keyboard controller that I use now, but I actually just bought a guitar-to-MIDI converter, which takes all the notes from my guitar (through its pickups), and translates them into MIDI notes. I've actually been using that a little bit recently to send notes to some softsynths and VSTs. I actually started out as a guitar player, so I'm more comfortable on a guitar fret than keyboard keys.

So after you jam these ideas, do you go in and edit what you've recorded, pulling out certain pieces?

Yeah, I'd say probably 90% of the melodies that I do write have started out as just me jamming around, and then after the fact I go in and mess with the MIDI notes inside of Live. I sometimes spend way too much time just jamming out though. [laughs]

"Tuning drum samples is such a subtle thing to do, but it can really make a song sound so much tighter."

How do you go about arranging your tracks then? Are you mostly working in the Session View or are you making clips from these pieces in order to form an arrangement?

I'm a very linear type of writer, so I actually never use clips [when composing], I only use them when I'm playing live. The software I started making music in was this General MIDI, left-to-right type thing, so that's always been how I work. Everytime I start a song, it begins in the Arrangement View.

Jamming these melodies and ideas out seems like the fun, fast part of the process. Do you then find yourself spending a lot of time configuring and arranging a song's structure?

Personally, I'm really fast at arranging; I spend much more time coming up with melodies and chord progressions, rather than working on the structure of the song. I think I can attribute that to the fact that I grew up listening to math rock and just structurally weird music. So now, I care about the structure, but I also don't think too much about it, and I kind of just go with the flow and think about "What would sound cool next?" rather than following a particular formula. I think that can lead to weirder and more interesting arrangements.

What do you think is the biggest difference between your early tracks and the ones you are working on now?

Originally, Giraffage started as a sampled-based project - I'd pull samples from anywhere not giving a fuck about copyright. [laughs] But now I have to be conscious about copyright, and it kind of sucks for my creativity, because the whole project was based on not caring and just using whatever samples sounded cool. Now I have to make sure the samples are cleared, or use royalty-free sample packs. 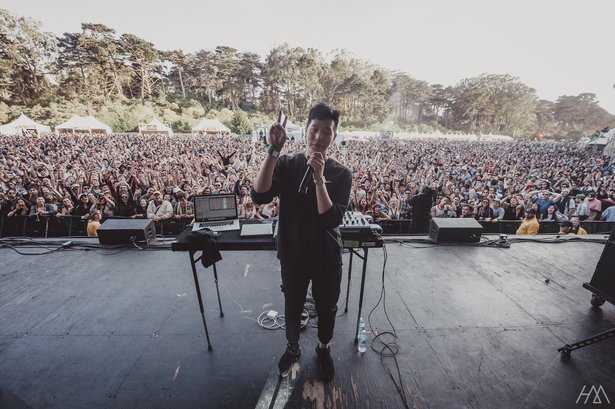 Giraffage performing at Outside Lands festival. Photo by Holy Mountain.

Has there been an evolution in your production technique as well?

I used to EQ and FX the shit out of my drums to get it to sound how I wanted, but I take a much more stripped-down approach now. I barely use EQ at all now, actually. [Instead,] I tend to find a drum sample that works really really well in the context of the song, and just use that and try not to touch it up too much with EQs and compression.

How many individual tracks does a Giraffage production usually contain?

I probably used to average around 40 or 50 tracks per song, I was a lot more complicated a few years ago. [laughs] Nowadays, I make a conscious effort to try to keep it to less tracks, maybe 20 or so is my average now.

And half of those are dedicated to drums and rhythmic elements?

[laughs] Yeah, I have literally one track for every drum element, so that takes up some space for sure.

"I tend to find a drum sample that works really really well in the context of the song, and just use that and try not to touch it up too much with EQs and compression."

How long does it usually take you to finish a song? A day, a week, months?

I'm more of a sprinter producer than a come-back-to-it producer. When I get a really solid idea going, I can usually crank out the song in a day or two days, but the interval between those solid ideas is what is tricky for me. It can be hard for me to get started on a song, but once I do get started, I can just run with it and finish it pretty fast.

You've done a few collaborations over the years, and even ended up working with The-Dream after he heard your remix album for his Love/Hate LP. Is there anyone else you are planning to collaborate with?

Working with The-Dream was insane to me, I was so starstruck. Recently though, I've been working with Slow Magic on a song, and I've wanted to collaborate with him for a long time. I love his sound, and we've toured together before, so I'm glad we finally made it happen.

As someone who mostly makes music by himself, do you find it challenging to collaborate?

With Slow Magic, we were sending each other stuff through the internet, so we were never in the same place when we wrote the song, and that was more comfortable. But working with The-Dream, for instance, I was actually in his studio with him looking over my shoulder while I was working.

Oh hell yeah, I was so fucking nervous. Honestly, it's really hard for me to work like that. I grew up making music alone in my bedroom, so to make it with ten other dudes in the room is always so weird for me.

Keep up with Giraffage on his website and Soundcloud.