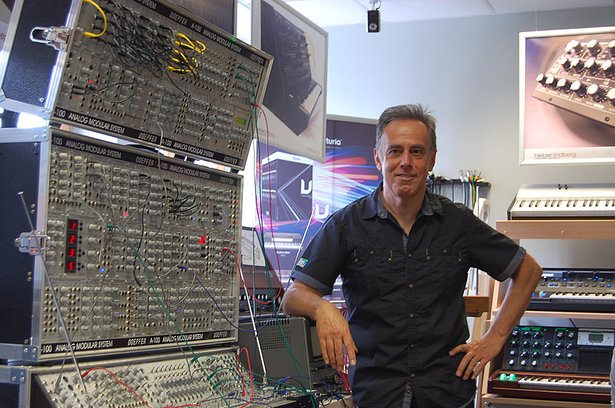 If any one individual can be said to be responsible for the resurgence of modular synthesis over the past decade, it would have to be Dieter Doepfer. With the introduction of the Eurorack standard for his own company’s A-100 modular system in 1995, Doepfer opened the way for other manufacturers to start producing an ever-increasing array of mutually compatible modules. Fast forward twenty years: interest in all things patchable and modular is at an all-time high, and what was once a cottage industry serving a niche clientele now seems to be growing at nearly exponential rates. With established synth makers jumping into the Eurorack game, the sound of modular synthesis is already finding its way into the mainstream.

For this last entry in our series of features accompanying the release of OSCiLLOT, Dieter Doepfer shares his perspective on the rapidly changing modular synth sector, and recalls his own beginnings in a bygone era of do-it-yourself electronics and secret circuit diagrams.

With the Eurorack system you made a crucial contribution to the rebirth and current popularity of modular synthesis. However, you didn’t start out as a musician. How did you come to be involved with music and technology?

When I was still a physics student I was playing in a band, and I would repair our equipment and build guitar effects (distortion, wah-wah, phasers, flangers, etc.). Back then, the guitar was my main instrument, and along with the usual effects that were available at the time I was experimenting a lot with various kinds of filter circuits. I wanted to get my guitar to sound more like this legendary synthesizer from the distant shores of the America – the Moog.

You have to remember, there was no internet back then and our methods of finding information were totally different from today. You could only hope to obtain, sometimes through some very roundabout routes, photocopies of magazines, catalogs, manuals or circuit diagrams. For example, an important source of information was the interlibrary lending of foreign magazines and books through the university library. You requested a particular document, and with any luck it would be made available to you a few weeks later for a few days.

Because my attempts to get my guitar to sound like a synthesizer via filters, phasers and distortion were not particularly successful, I realized I had to delve deeper into the matter. Luckily, in the mid-’70s, an electronics magazine called Elektor published the circuit diagram for a modular synthesizer called FORMANT. Each issue of the magazine focused on just one module (the keyboard, VCO, VCF, VCA, ADSR, LFO, etc.) so that over the course of a year you had the whole thing together. So of course, I just had to build this thing, and this was where lots of people got their first detailed technical understanding of how a synth is constructed and how the basic circuits function. In that sense the FORMANT was a milestone for us synthesizer freaks.

Of course, as soon as the FORMANT synth was finished, people wanted to improve and expand its features and functions. So I started developing and selling a few FORMANT-compatible modules – among others, a frequency divider/sub-octave generator, a voltage-controlled phaser, a string phaser, an envelope follower, a voltage controlled LFO, a VU meter, a system timer, voltage controlled switches and joysticks. One of the things the FORMANT didn’t have was a 24dB filter, and because other hobby electronics magazines had gotten wind of this new synthesizer trend, another magazine called Funkschau published the schematics for a 24db Moog filter – but without explicitly stating what it was.

So one needed a bit of background knowledge to realize that the diagram they’d published was actually nothing less than the Moog filter. A little later, the same magazine published a circuit diagram of the Moog ADSR envelope. At the same time, the first books about synthesizers were being published. But my big break really came when a friend and I got the chance to restore an entire Moog modular system – in fact, the same one that was used to record “Popcorn.” We managed to get a hold of an official Moog service manual, and in the process of restoring the system I learned quite a lot. 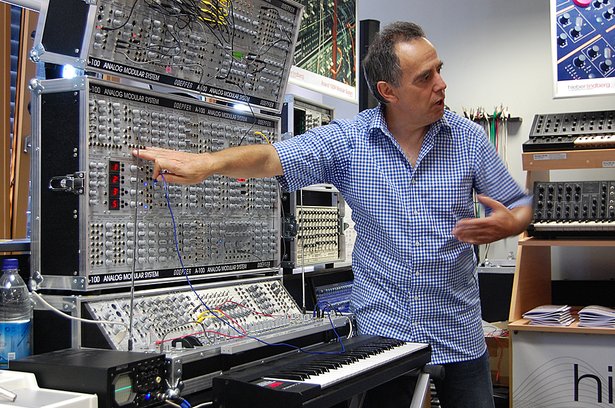 Dieter Doepfer explaining the A-100 system

Twenty years ago you established the Eurorack format for modular hardware, developed many of the basic modules, and have continued to produce new and revised modules ever since. What’s your take on the growth of the modular hardware scene over the last ten years or so? Is the emergence of so many small module manufacturers basically good for the development of the sector as a whole? Or are we arriving at a situation similar to that of guitar pedals – with hundreds of distortion effects that differ mainly in the tone of their marketing?

That’s difficult to answer – I wish I knew where this was all headed. I’ve just come from the NAMM show, and there was some talk there of a “Eurorack explosion.” Now, just about every company that has anything to do with synthesizers is putting Eurorack modules on the market: Waldorf, Jomox, Oberheim, Dave Smith, Radikal Technologies, Studio Electronics and others. Up until a couple of years ago, the sector was still fairly small and everybody knew each other. Now there are a hundred manufacturers with a thousand modules, and it’s not just me who’s lost track of it all – it’s the dealers and retailers who are groaning under this glut of modules. Up to now, all this expansion has been good for us, mainly because the other manufacturers tended to build more exotic and unusual modules for which users still needed the standard modules that we make. We’ll just have to see how this all develops, but it does remind me of the way the stock market overheated a few years ago.

From your perspective, what’s the key to the recent popularity of modular synthesis?

As I see it there are several factors at work here. Certainly the physical interaction (dials, knobs, cables, etc.) that many musicians who work with laptops and plug-ins have been missing – that’s one major factor. And of course, the fullness of the sound plays a role, as well as the feeling of creating something unique. Working with a modular system, you often find yourself coming up with really distinctive sounds that couldn’t have been generated in any other way and are also difficult to reproduce otherwise. I think that explains why, for instance, the classic analog sounds of artists like Kraftwerk keep getting sampled and recycled after all this time.

What can you tell us about upcoming developments at Doepfer? And how do you imagine modular synthesis and the Eurorack format will evolve?

I’m sure that we’ll continue for the foreseeable future. There will be a number of modules, or combinations of modules, that will be released as standalone devices (such as the A-157, an 8x16 trigger sequencer). We also have quite a few ideas in the pipeline, modules that lots of customers are waiting for. But I do think that after the current wave of hype has subsided, only those manufacturers that offer high-quality products and good service will remain.