From Creating a Soundtrack

Modern film trailers often share similar musical and sonic elements. In Lesson 1, students examine and dissect the sounds and music of film trailers. They explore and layer the supplied cinematic samples and share musical ideas with their peers.

* Depending on your class focus, you may wish to extend this and ask students to further define the distinctions and intersections between foley, sound effects and score.

This collection of film trailers can introduce the topic of the sounds and music in film trailers with your students and provide them with insights into the type of music they will be creating in this project.

Tip: Turn the classroom into a cinema. Emulate a cinema experience, watching the videos projected onto a screen or large TV in a darkened room with a decent sound system that provides a good listening experience.

Q. What types of sounds can be heard?

Tip: Ask the class to listen without watching. Direct student attention toward only the musical elements and ask what they imagine this film is showing.

The Inception trailer provides a quintessential Hans Zimmer soundscape. It differs from the Williams score in that the focus is not only musical but also sonically driven, using the instruments as a sound effect.

Q. How could you describe the tonal quality of the sounds in this trailer?

Tip: Brainstorm student’s words on the whiteboard. Remind students there are no wrong answers!

Q. What sounds and instruments can you identify in this trailer?

TIP: Ask students to identify common instruments and textures in the trailers shown.

When students watch and listen to music within film trailers, the goal is to move students from passively watching the trailer to actively listening to all the different sonic elements.

When watching and listening to the soundtracks, can students

“Getting students to deeply listen to music is a key skill for musical growth. Identifying and describing different elements by investigating the sonic features of a film trailer is a challenging, but worthwhile task.”  — Matt Ridgway

In this short practical task, students work either independently or in pairs to explore simple musical ideas by layering the sounds provided in the Lesson 1’s downloadable Explore and Combine Cinematic Sounds - Live Set.

"After a short amount of time, students should be able to identify what sounds they like and make aesthetic decisions based upon musical preference – a formative part of creative development." — Matt Ridgway

This Live Set contains a single Drum Rack loaded with 64 classic blockbuster-style cinematic hits and percussive loops which can be easily combined and played via a MIDI controller. 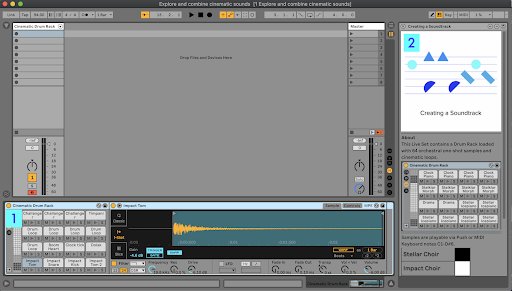 Classroom Tip: Strategies and prompts for students sharing their work

Practical tips for how work may be shared

“Encouraging students to share and talk about their work in front of their peers provides an opportunity for students to feel engaged, positive and connected to their music-making.” — Matt Ridgway

Go to Lesson 2: Use Images as Inspiration for Composition ›

Back to project overview