IRCAM has used the expertise from decades of dedicated research and development to produce this collection of Max for Live devices. Through real time audio analysis, their advanced physical modelling synthesis environment and other leading technologies, IRCAMAX 2 lets you manipulate, process and reinvent sounds in ways you wouldn’t have imagined possible.

Renowned for their explorations of musical expression and leading research in science and acoustics, the Paris-based IRCAM institute now offers up a second Pack for Live users. Eight audio effects, two instruments and one MIDI effect make up a collection of unique and powerful tools for advanced audio processing, expert sound design and creative experimentation – all within accessible Max devices.

Here’s a rundown of the Pack’s instruments and effects.

IM-Ianalyzer: A real time polyphonic Audio to MIDI converter that lets you manipulate and resynthesise a signal’s psychoacoustic properties – and capture and reuse the resulting data as MIDI.

IM-NoteTracker: A Real time Audio to MIDI converter that extracts a signal's estimated pitch and amplitude and converts them to MIDI note components.

IM-Chromax: A spectral delay that converts chords into harmonics models, whose set of consisting frequencies can be further transformed, and used to define delay, feedback and filter shapes.

IM-GrainDelay: A grain delay effect that can be synchronized to Live’s tempo and used with the IRCAMAX MIDI Send/Receive device to receive MIDI notes that control transpositions of the grains.

IM-MultiFX: Four effects in one – delay, reverb, chorus and auto pan –  that can be used as a simple FX box tool for all your synths. 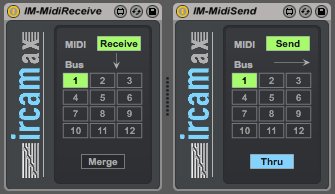 IM-Midi Send/Receive: Whether coming from a MIDI clip or the result of audio analysis of an audio track, these devices let you send and receive MIDI data between any IRCAMAX device within a Live Set.

IM-ModalysSynth: A polyphonic synthesizer based on IRCAMs flagship Modalys physical modeling engine – technology with over 20 years of research and refinement.

The IRCAMAX 2 devices were developed by Jean Lochard at IRCAM and Manuel Poletti at Music Unit.