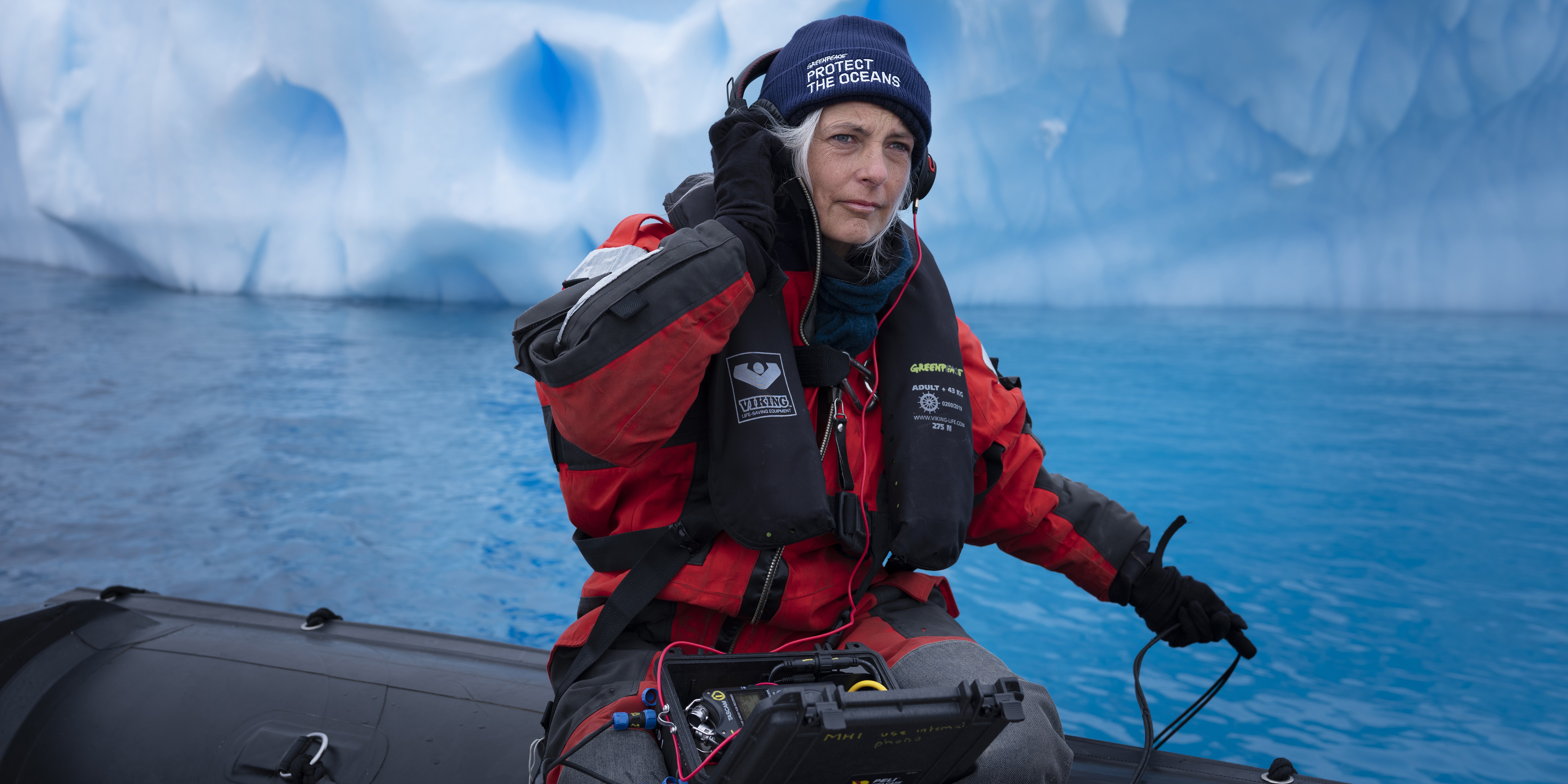 Our world is full of living sounds. Animals sing, howl and chatter on a changing backdrop of weather and waves. Even the racket of a city can be appreciated as a sign of the pulse of life on earth. But although the human population is an integral part of our ecosystem, it’s well documented that our activities threaten the balance of our planet and the life it supports. The latest IPCC report tells us that the damage we’re doing to the environment is already worse than expected, and that urgent action is needed to slow the destruction. The biodiversity loss we’re facing means that many of the sounds of the natural world are also heading for extinction.

As music makers, and as individuals, it can be difficult to imagine how we can help. But our efforts can start to feel more significant when we collaborate. The Climate Soundtrack is a music project that brought together artists, scientists and two global activist networks to celebrate the sounds of the earth in the name of conservation. The result was a sample pack made from the Greenpeace sound library and a 41-track compilation featuring music from around the world – plus funds donated to local, frontline organizations doing crucial work in areas already suffering the effects of the climate crisis.

“I think music in protests and social movements always had a role to play in reflecting ideas, offering inspiration and bringing people together,” explains Robin Perkins, the climate activist, DJ and producer who led the project. “It’s always like – what can we practically do? An art project, what’s that going to change? – Well actually, art has a massive influence over culture and how people see themselves and the world.”

It started when Perkins was contacted by a colleague at Greenpeace who offered him access to a sound library. Since the 1970s, Greenpeace has been recording sounds for scientific studies, campaigns and communications, but the library had never been sorted or cataloged until then. He remembers the call going something like: “I’m sitting on two weeks’ worth of audio, like really high quality sound recordings of nature. Basically everything from whales, to ice, to the Amazon Rainforest. Would you like to do something with it?”

For his music project El Búho, Perkins mixes Latin American folk rhythms with organic sounds, birdsong and downtempo electronica, so when he heard the recordings he knew he’d landed on an invaluable resource. Perkins is also a member of DJs for Climate Action, a network formed in 2011 when a group of touring performers felt compelled to do something about the negative environmental impact of their profession. Together, they came up with the idea of using the recordings as the basis for a project about the future of the planet. 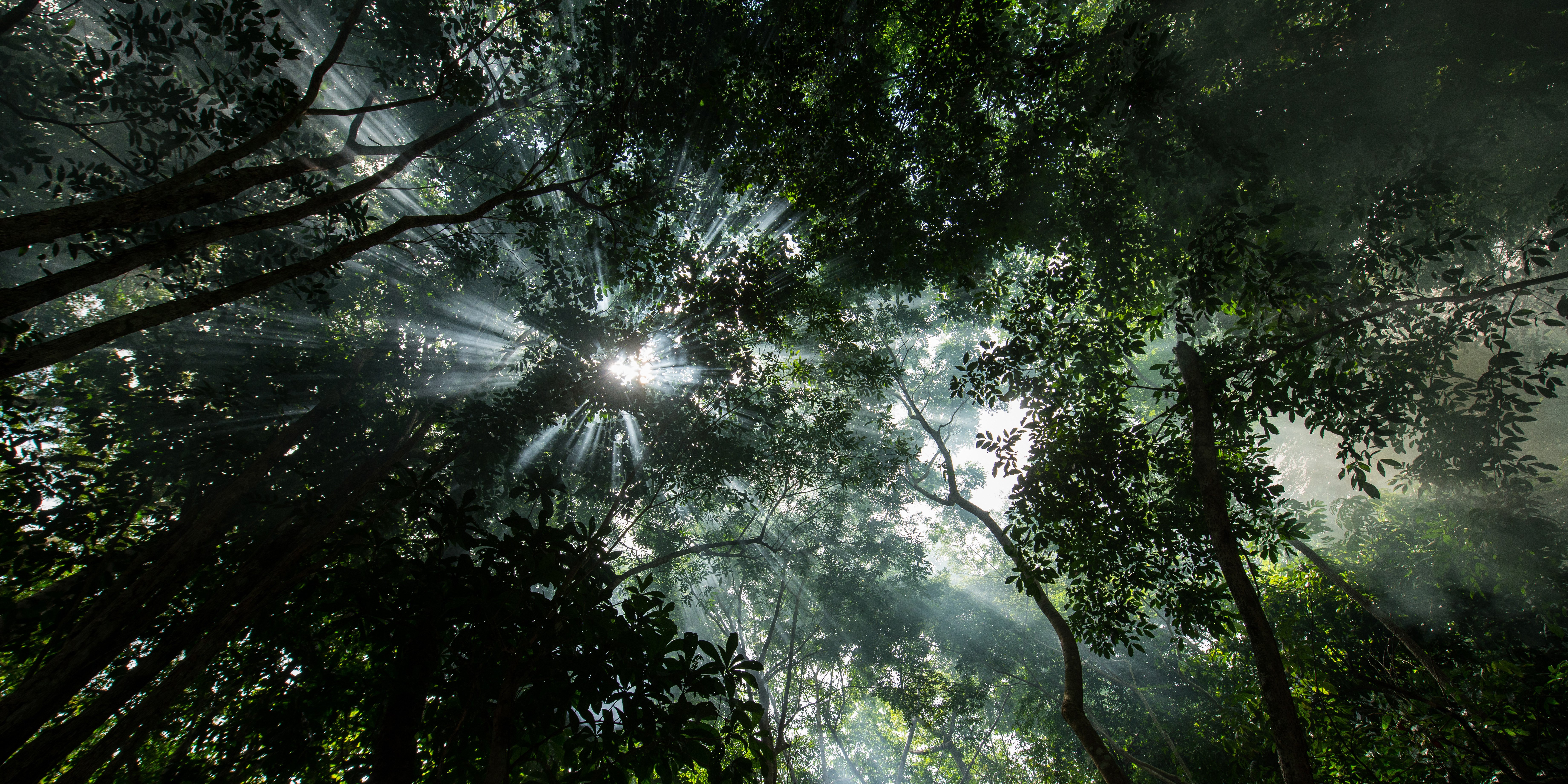 Forest near Tapajós River in the Amazon Rainforest

They realized that working with such a huge library of recordings could be overwhelming for music makers. With Greenpeace on board, Perkins and a team of friends started processing the raw sounds into a set of usable samples. They organized them like a classic sample pack, with folders of one-shot drum hits, loops, effects, melodic and bass sounds, and some of the raw material for texture and atmospherics. Each contributor brought their own expertise to the sound design segment. Chilean beatmaker DJ Raff made some characteristic vocal chops, and Ecuadorian producer Quixosis submitted a folder of tape delay experiments.

Perkins says the sound design process presented some challenges along the way. “When you’re making the kicks or bass sounds, you can’t compete with synthesizers or a real kick drum. So if you listen to the kicks they’re nice and different, but they’re not like an 808 ‘boom’. It’s more like ‘dth’. But maybe we don’t need to compare them – they’re just different.”

The natural world might not deliver with the punch of an 808 without a ton of processing, but there were a few surprises. Perkins was most interested in seeking out the existing musicality in the recordings of animals and insects, and he discovered that some have a sense of rhythm that would be the envy of most musicians. “There was a recording of a bunch of crickets that was actually already really rhythmic, like – Ok, it’s done! Crickets are at 113 BPM!”

The abundance of source material meant it was difficult to trace every recording back to its origin and purpose, but they had more information on some recordings than others. One fascinating source came from Dr. Kirsten Thompson, a biological scientist and lecturer in ecology at the University of Exeter.

Thompson traveled to Antarctica with Greenpeace to investigate and document the effects of the climate crisis by monitoring biodiversity using acoustics. “Sound is hugely important for all whales and dolphins. They use sound to communicate with each other and the toothed whales use sound to echolocate on their prey,” she explains. “Each species vocalizes using a certain frequency and different rhythms and tones, so this means that we can make recordings and identify what species we’ve detected even if we haven’t been able to see them.”

For acoustic surveys performed on a ship, they use a 400m hydrophone array with two stereo elements for detecting high and medium frequencies. This runs through a digital acquisition box and into a laptop. When they’re on inflatable boats, they can make shorter recordings of animals vocalizing within human hearing range. For that they use a smaller hydrophone that runs straight to a Tascam DR-40 digital recorder. 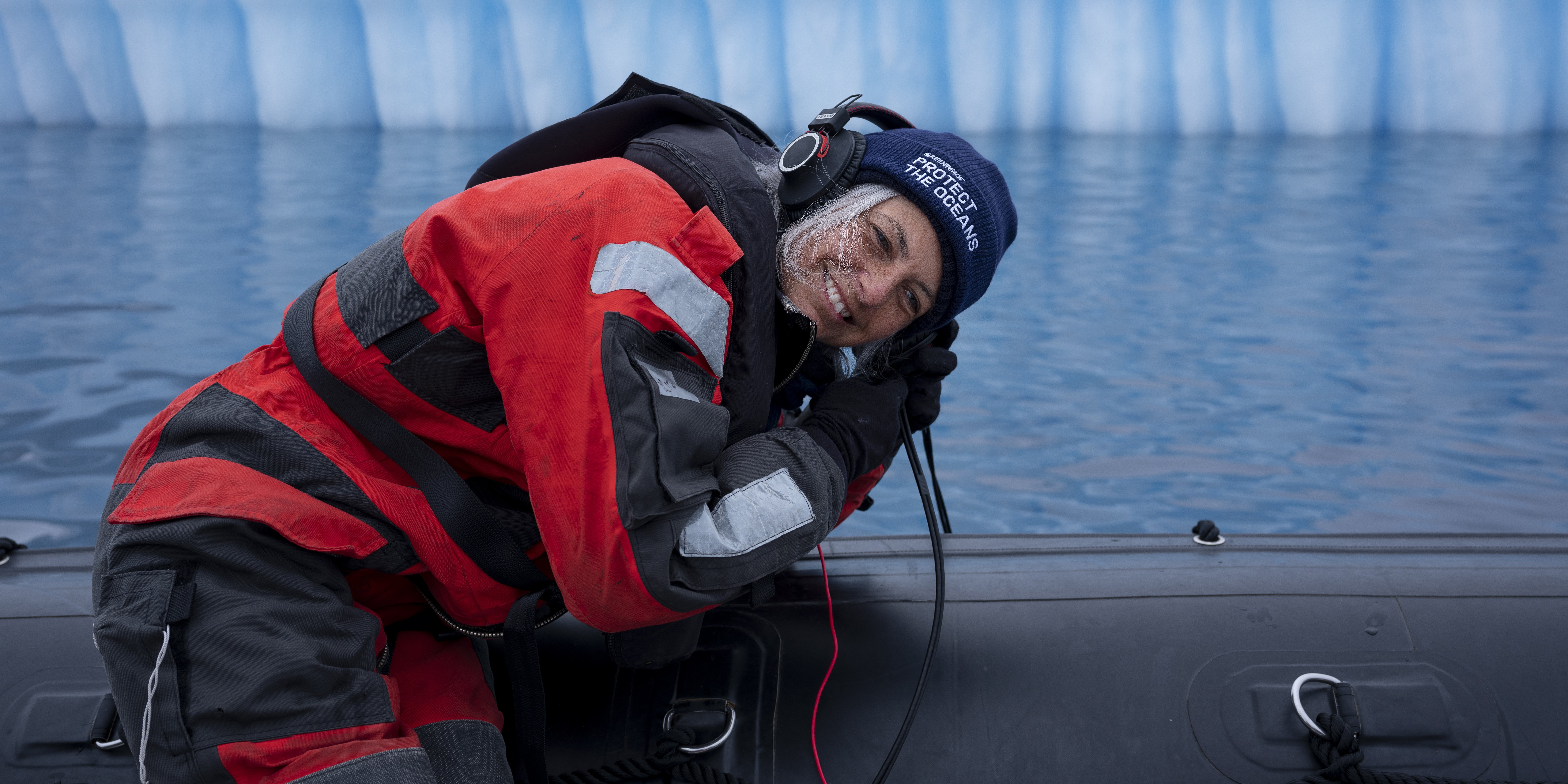 Dr. Kirsten Thompson uses a hydrophone to listen for whales.

Recording in polar conditions is not the same as recording in a studio. Everything has to be stowed in a waterproof case and backup power is essential – batteries have a much shorter lifespan in the freezing temperatures of Antarctica.

Thompson’s hands-on research is crucial for the conservation of endangered species, but she doesn’t underestimate the efforts of those with different skills to her own. “Highlighting conservation issues and mobilizing people from all backgrounds is hugely important in implementing change, both on a local and a global scale. We’re all in this together, so bringing skills and ideas from different disciplines really can work in solving big global issues.”

The same idea motivates Indonesian DJ and producer Ninda Felina, who joined Greenpeace for a 10-day trek to record the sounds of West Papua’s rainforest.

Birds of paradise in West Papua

“Music is just one of many creative ways to share our message to audiences,” she says. Felina has been volunteering with Greenpeace since 2014. During the Indonesian forest fires of 2015, they recognized that many young, middle class city-dwellers had trouble connecting environmental issues to their daily lives. The situation seems even bleaker without that demographic’s support and action, so Greenpeace enlisted Felina to use her skills and network to help reach them. She went to the rainforest in West Papua with a BBC sound recordist to learn about and document the environment there. Later, she’d work on music and visuals made from the recordings for the Save Our Sounds campaign.

Her favorite part of the experience was capturing the bird-of-paradise calls. Many of these species are endangered because of the destruction of their natural habitat, so they’re not easy to catch. “I hope this project will be a reminder for all of us that we were born and live in nature, so we should appreciate it.” 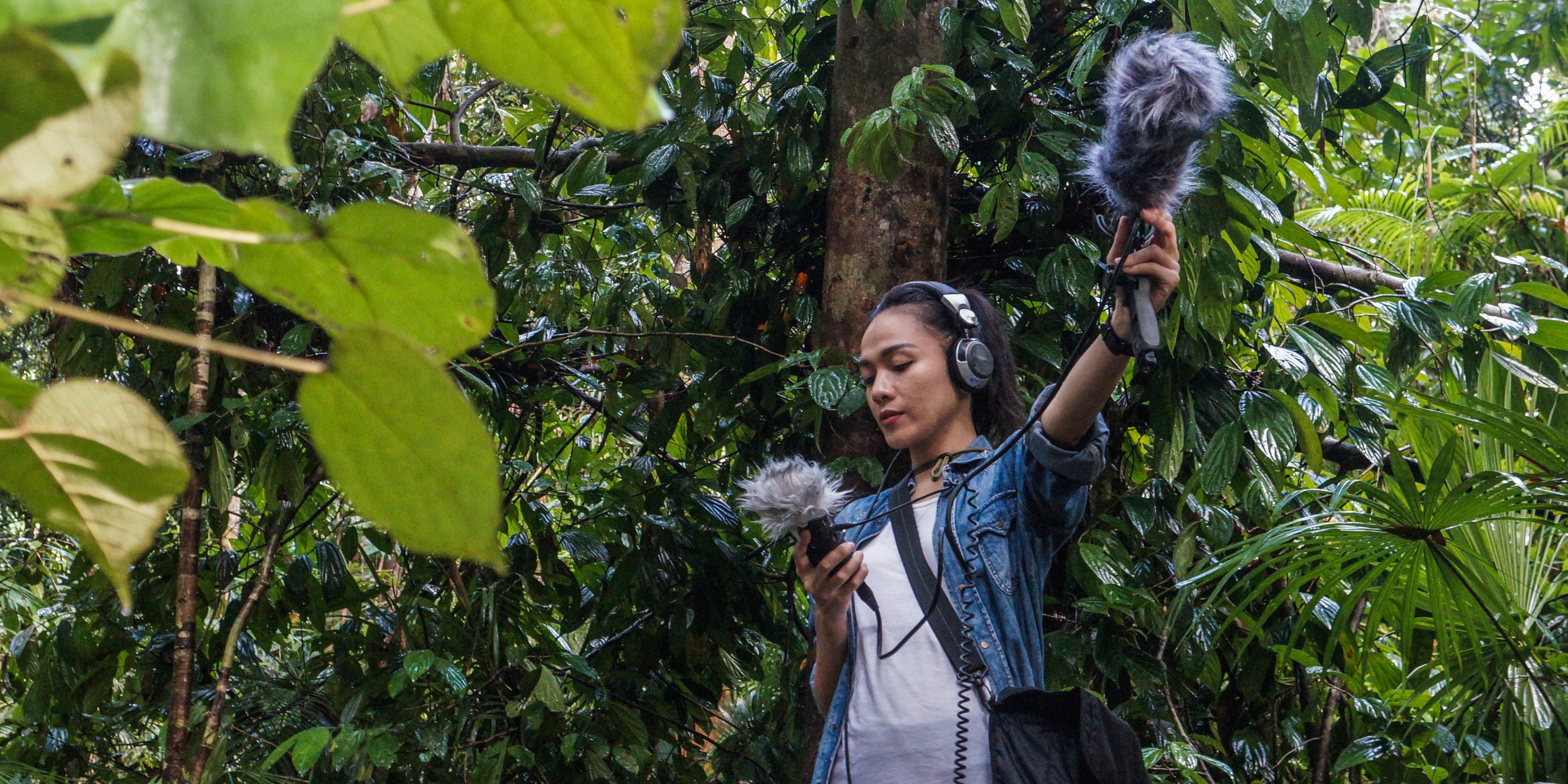 Ninda Felina records sounds in the rainforest in West Papua.

From the beginning, Perkins and DJs for Climate Action planned to engage as many people as possible by releasing music made from the recordings and samples. “We wanted to present something beautiful and creative around this message of climate and the planet and why it needs saving,” explains Perkins. They sent the sample pack to their network and asked them to create a piece of music that answers the question ‘‘What does the future sound like?”

He says they expected to get around 30 or 40 submissions from friends, but they ended up inspiring over 300 pieces of music. Judges Nicola Cruz, BLOND:ISH, Cosmo Baker, and Matt Black helped choose the tracks that would make it onto the release. They released 41 tracks on a digital compilation and pressed a double LP with the final selection. The vinyl pressing industry’s emissions were a concern, so they opted to produce the record with Dutch pressing plant Green Vinyl Records, who use an injection molding process that reduces emissions and is free from toxic PVC and toxic Phthalates.

DJs for Climate Action is 100% non-profit, and the funds they raised are being donated to organizations working in some of the areas where the original samples were recorded. Stories about the state of our world can be disheartening, but Perkins believes there’s still hope, and that creative projects like this can motivate people to consider their role in finding solutions.

“We wanted to engage producers to use their creativity to think of a future that isn’t necessarily about doom and gloom and the end of the world. It could be, and some people did that, but a lot of it was really beautiful music about why we should get our shit together to stop these magical places disappearing.”

Keep up with DJs for Climate Action on Instagram, Soundcloud and Discord.