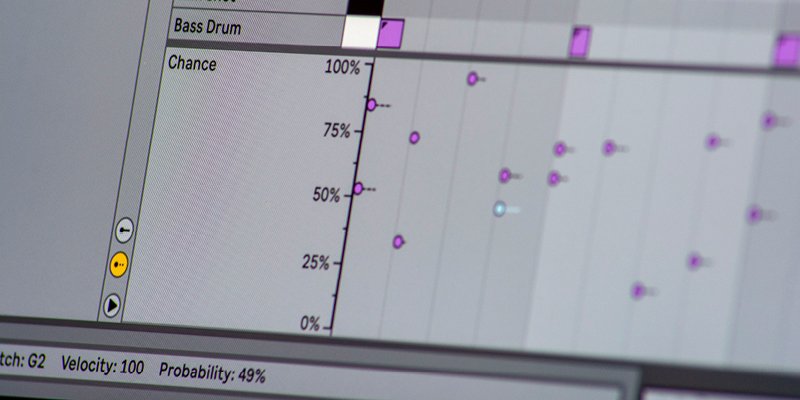 When singer, composer and producer Mica Levi was tasked with creating the soundtrack for Jonathan Glazer’s alien femme fatale flick Under the Skin, she looked to John Cage and Karlheinz Stockhausen for some ideas on how to evoke the sound of a living, growing, unknown organism.

“[it’s] supposed to be unpredictable, alive and undecipherable. It is controlled in a sense, but it is aleatoric... as long as you solidify the base, you’re then leaving things to chance – and leaving the possibility for catastrophe and anarchy is kind of ideal. I love that.”

It makes sense to work with chance and welcome in erratic and irregular sounds when you’re creating the sonic world of an extraterrestrial being. But many producers work with chance and probability for more earthly reasons – to invite happy accidents, to add variation to repetitive parts, or to decide on the structure of a piece of music. To weave chance into your workflow you can take your cue from the composers and producers who have rolled the dice before you, and you can lose some control with Live 11’s new probabilistic features.

In the classical realm, music with elements left to chance is known as aleatoric, from ‘alea’ – the Latin word for dice. Musical dice games were a popular parlor entertainment for pianists at the end of the 18th century – they came with sheet music, and the sections to be played were determined by rolls of the dice. Mozart is said to have thrown dice to decide on the order of sections in a minuet, and is attributed as the creator of one of the most famous musical dice games, though it wasn’t published until after his death.

Mozart might have dabbled, but the first western composer to put chance and indeterminacy at the center of his practice was John Cage. For Cage, aleatoric music wasn't just a gimmick, but an essential tool for getting the composer's ego out of the way – a way to generate results he would never have chosen himself, in both composition and performance. One of Cage’s key chance compositional methods was to consult the I Ching – an ancient Chinese divination text. The method of interpretation he devised would decide on the piece’s tempo/s, which notes to use, their duration and dynamics. This was the process used to compose Music of Changes (1951) among other works.

One of Cage’s most famous pieces, 4’33, is an example of chance at the level of performance. The musicians spend 4 minutes and 33 seconds not playing their instruments, so the focus is the ambient sound in and around the performance space, as listeners’ hearing is heightened by the silence on stage. Other examples of Cage leaving performance to chance include works for radios, scores that invite the performer to decide on the rhythm and volume of the notes they play, and pieces written with graphic notation that could be interpreted any number of ways.

Some artists use chance by creating a system to generate sound and then taking their hands off the wheel. One such system uses unsynced tape loops of different lengths, as in Brian Eno’s “2/1”. The loops will always meet at different points, creating an endlessly evolving soundscape. Eno’s generative criteria was that the music must change continuously and never repeat itself, and that it could last forever if left to its devices. Of course, the way music is distributed confined him to releasing recorded sections of his generated ambiences, rather than the generative system itself.

Chance doesn’t have to dictate every aspect of a piece – its influence can be much more subtle. Herbie Hancock’s “Rain Dance”, from his 1973 album Sextant, is built over a series of irregular bloops generated by a Random Resonator device created by audio engineer and designer Jim Cooper. Hancock recorded the Random Resonator onto tape, then listened back and found a section that sounded like it had some patterns. That section was made into a minute-long tape loop that wound its way around the studio, using ashtrays and staplers as tension points before feeding back into the machine. The synthesized droplets captured in the loop set the astral mood of the track and provided a foundation for the band to improvise over, pushing the players in directions they otherwise wouldn’t have explored.

Argentine singer, songwriter and Loop 2018 participant Juana Molina used a similar randomized sound in her 2013 track “El Oso De La Guarda” – though completely accidentally, and in this case it provides release, rather than a foundation for other ideas. At the end of the song a series of irregular synth notes plays, accompanied by ghostly creaks. This was a sound Molina had created for other purposes, years before – a note was programmed to repeat randomly, with unpredictable lengths and intervals. She triggered it accidentally during the recording session and decided to leave it in there.

Digital experiments with probabilistic music were initially an academic pursuit. American composer Paul Lansky’s Chatter computer music trilogy was created between 1985 and 1988, and the first piece, “Idle Chatter”, was made on an IBM 3081 mainframe computer system that took up a whole room. The three pieces were all created by chopping up a recording of Hannah McKay reading a poem, and arbitrarily rearranging the snippets of spoken word to obfuscate the meaning. The results are constantly shifting, and hinting at the natural rhythms of human speech, but never quite becoming clear.

While music like Lansky’s Chatter series explores the capabilities of digital mediums, glitch music makes art of their mistakes. Glitch celebrates sonic artifacts and digital misfires, and producers often use chance-based methods to encourage these happy accidents. The German electronic outfit Oval’s 1995 album 94diskont was created by drawing on CDs with a marker to encourage them to skip, then sampling the results. It was totally unpredictable which parts of the CD would skip, and what the rhythm of the skips would be. The result is eerily beautiful, with jittering rhythms and textures that sound as oceanic as they do technological.

Handing over the reins

The impetus for Live 11’s inclusion of probabilistic features is humanization as much as it is experimentation. Part of the beauty of recording a live drummer is the subtle movement in their playing – the strength of each hit is slightly different, timing moves slightly, or sometimes they’ll even skip a hit. These small changes feel human, and it’s the reason programmed beats can sound stiff and robotic. Live 11 includes ways to quickly add in variation and humanize your beats using chance.

You can now set a velocity range on MIDI notes. This allows you to randomize velocity within a given range each time a note is played. It’s particularly useful for injecting some life into repetitive parts such as hi-hats. To take the unpredictability a step further, use the note chance feature to set the likelihood that the note will play at all – for example, set the chance at 50% for half/half odds that the note will play. When you set velocity ranges or note chance on looped parts, they’ll change with each play for a beat that keeps your ears interested.

Note chance is also useful for creating melodic parts that vary on each loop to create interest. It’s especially good for creating a natural, droplet-style sparseness out of busy, higher-pitched melodies – think arpeggiated bell tones or clusters of synthesized pings.

You can use this method to create probabilistic chord progressions by selecting a pad or key chord sound, then adjust the chance on one, a few, or all of the chords. Experiment to see which chords sound best dropping in and out, and how frequently – lower chance on all your chords can sound less like a steady chord progression, and more like occasional flavor, while higher chance on a chord or two can act as more subtle changes to a solid harmonic base for your song.

If you’d like to take a leaf out of Paul Lansky’s book, try experimenting with probability on samples of voices. Take a spoken or sung vocal sample and slice it up in a Simpler, then arrange the chopped parts in a MIDI clip and lower the chance on each slice. A single choppy vocal line makes for tasty ear candy in house tracks, or it can be an exciting way to remix a lead vocal in a poppier tune, but to really create a Chatter-esque cacophony of voice snippets try adding a few layers of probabilistic spoken voices.

Using this chance-enhanced sliced Simpler method on instrumental samples is one way to encourage glitchy happy accidents. Try playing with different slice lengths, adding different effects and resampling while you tweak the parameters to come up with digitally alien variations on a theme.

It’s easy to fall into habits with the arrangements of your productions and end up with a bunch of tracks with similar structures. Using methods of randomization can help you to come up with arrangement ideas that you otherwise wouldn’t consider. Just as Mozart used to throw dice to come up with structural ideas, Live 11 now allows you to set scene Follow Actions. To come up with a completely random arrangement of your parts, set all your scenes’ Follow Actions to “Other” and start recording into Arrangement View. Then listen back to the arrangement Live has created for you, choose the transitions you like best and create the rest of your track around them.

To go all out on chance and probability use all the tools at your disposal at once – just let Live drive! Create a collection of clips that make use of note chance and velocity, and set Follow Actions on both the clips and the scenes. This way, you can create a generative, evolving piece of music. Including a mix of busier, fuller clips and sparser (or even some silent) clips will encourage dynamic contrasts in your work, and you can manually adjust the amounts of probability in your clips if you ever feel you want to hear more or less of the notes in your rhythms and melodies (helpful if you’re using this in a performance setting).

Using scene Follow Actions will ensure your piece includes some anchor points where set clips come back together, which is great for beat-driven genres, but if you want to create generative ambient music a la Brian Eno, you might want to leave them out for a seamlessly ethereal listening experience.

Iron Curtis discusses letting go of control by using chance and probability in the studio.

English subtitles can be enabled on the video player

Made in Ableton Live: Rossano Snel