Drummers and electronic beat makers have similar problems to solve, but have traditionally approached solving them in radically different ways. Recently however, more and more innovative drummers are incorporating the language of electronic music into their drumming, while also adapting the subtle timing inflections and “feel” of human playing into their beat programming.

Kiran Ghandi, Katharina Ernst and Zach Danziger are drummers who come from different musical backgrounds but are united by their fluidity in moving between the worlds of live and sequenced drumming. At Loop 2015, the three discussed and demonstrated their perspectives on topics such as playing with backing tracks or loops, playing “ahead of” or “behind” the beat versus strict quantization; and how drummers generally think about the flow of musical time. 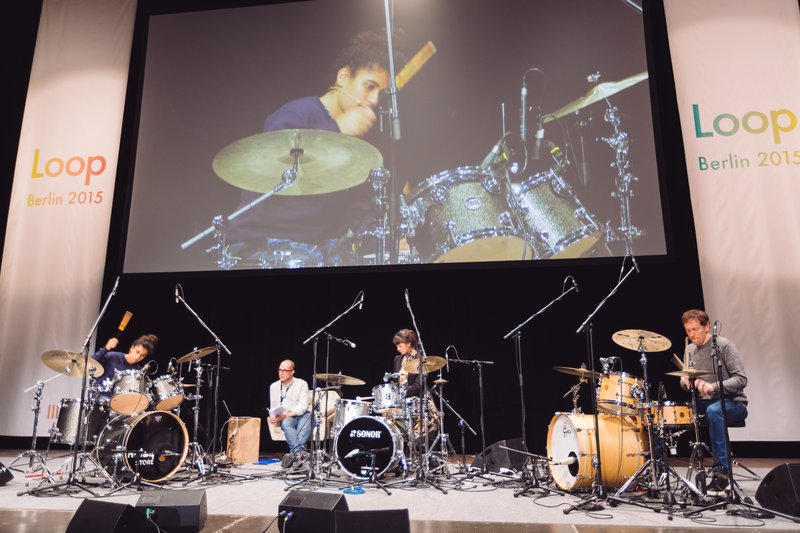 The sonics of ‘feel’

First up, Zach Danziger and the effect of sound selection on groove. The New York-based drummer has worked with artists including U2, Mary J. Blige, Rod Stewart and Miley Cyrus as well as composing and playing on numerous film soundtracks, including the Ocean’s Eleven, Twelve and Thirteen movies. As an early proponent of integrating Ableton Live and other electronics into his kit playing, Danziger knows a thing or two about where and how these two worlds overlap. Here’s Danziger in action with his band Mister Barrington:

For both drummers and non-drummers, working with the sheer number of sounds available in sample libraries and through synthesis brings its own set of opportunities and considerations. As Danziger demonstrates in the video below, the specific combination of sounds in a rhythm track can have a subtle yet decisive influence on its ‘feel’.

Another of the panel participants, Katharina Ernst, is an interdisciplinary artist whose practice includes theater, installation, choreography and video work – all of which relates in various ways to her interest in rhythm. As a drummer, Ernst can often be found on stage with other members of Vienna’s vibrant freeform improv scene. At the same time she’s also capable of playing with an astonishing degree of precision, as this clip of her ‘live techno’ band Ventil demonstrates:

When moderator Dennis DeSantis asked about the distinctive steadiness of her playing, Katharina explained that her minimalism has nothing to do with imitating the pulse of a drum machine. Instead, her approach is all about layering simple elements to produce patterns that become ‘three-dimensional’, as can be seen and heard in the clip below.

This same pattern programmed in Live’s MIDI editor looks like this:

Of course, ideas about structure, feel and sonics can flow in either direction between kit playing and beat programming. For Kiran Ghandi, electronic music – and specifically the way in which tracks are arranged as stems in a DAW – has had a definite influence on her playing. As a touring drummer for Thievery Corporation and M.I.A., she’s certainly experienced in integrating her kit playing with sequenced rhythms. Here’s Ghandi, showcasing her work with M.I.A.:

In the following clip she breaks down how attentive listening to electronic music led her to the idea of ‘mapping’ each of her limbs to play one stem of a rhythm pattern:

Check out more videos and articles from Loop.

Made in Ableton Live: Rossano Snel