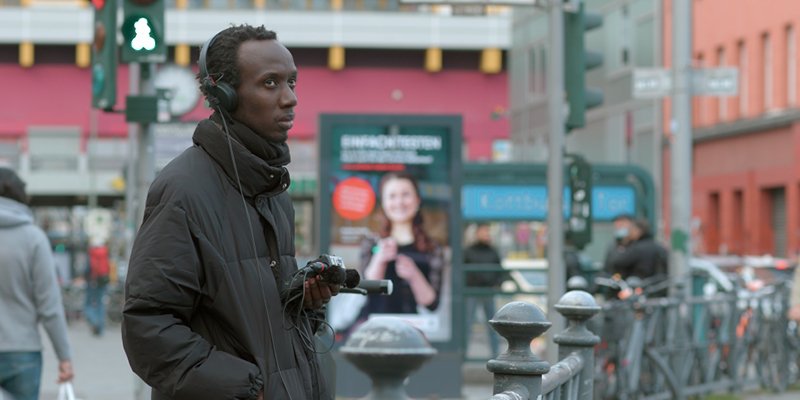 Is the music we make necessarily informed by where we’re born and raised? Or is it largely determined by where we go from there? Or maybe where we are right now is the only place that matters? These and related questions are at the heart of our new artist documentary movie; KMRU: Spaces.

The movie, first streamed as part of the online event Loop Create, follows KMRU’s path from his childhood in Nairobi, to his family’s move to the outskirts of the city, and finally to Berlin - his current home. Along the way we see footage of the artist in some of the places and spaces that have inspired him in his work and hear how his changing surroundings impacted his way of hearing, recording and crucially, composing his music.

In order to get a little more insight into some of the topics KMRU touched in the film, we followed up with him recently, this time from a somewhat more technically-minded angle.

You’ve mentioned that some years ago you stopped using the grid or the metronome in Live. Was there a reason why you did so and how did it affect your production?

I think this came about when I started using more texture-based sound and field recording in my work. I would not know what a recording’s ‘time’ is, so I’d just approach composing more intuitively. There is some sense of higher intuition when not using the metronome, I find myself knowing when it's right to layer a new part, I hit record anywhere in the piece not constrained if it’ll be in time or not.

How do you use time-based effects like Echo without a grid? Tap tempo, or do you just set delay times by ear?

It's more by ear and very spontaneous, not that I’d want my delay to be locked in the grid. Most times I record these effects while making a piece.

On your latest album Logue there are some more rhythmical tracks like “Jinja Encounters”. Did you return to using the grid for these tracks, or if not how do the rhythm structures come about?

You’ve mentioned that you usually use field recordings at a very low volume? How did you arrive at this strategy and what effect do you think it has on the listener?

Not all compositions, but most of my pieces will have field recordings that are quite low in volume and subliminal; providing an impetus for the listeners to try and listen to these real or imagined sounds.

What are your favorite post production tools for field recordings? You mentioned a (granular) Max or Max for Live plug-in. Could you tell us more about it? Are there any other tools you’re using regularly?

Most times I'll use granular synthesis on field recordings to get more discrete sounds from them, and still layer with the original recording itself. I’ve been using the Max for Live Grain Scanner (Amazing Noises) in most of my projects mostly for textures and spectral imaging sounds. Apart from this I often use the Chase Bliss (MOOD) Pedal which I process synth sounds.

You mentioned that each of your albums has a very different approach (some more improvised, others more composed). Could you please tell us some more about that? Do you always start with a specific concept in mind, or does it emerge as you are working on it?

I usually have a concept or narrative that will be the basis of the different pieces. For most improvised pieces, I’ll set the tools that I would use and do one-take recordings; these are always long-form compositions. For the composed pieces, this depends on the specific concept I have, probably takes longer durations trying out different tools, or find myself reading in between the process, and other times i would make a track and get an idea which could cut across different pieces.

Download here a selection of KMRU’s field recordings made in Nairobi and Lamu in Kenya, Lunkulu, Uganda as well as in Montreal, Berlin and Paris.

Please note that under the Creative Commons Attribution License, you may remix, adapt, and use these recordings in your work, even commercially, as long as you give credit to the original creation.