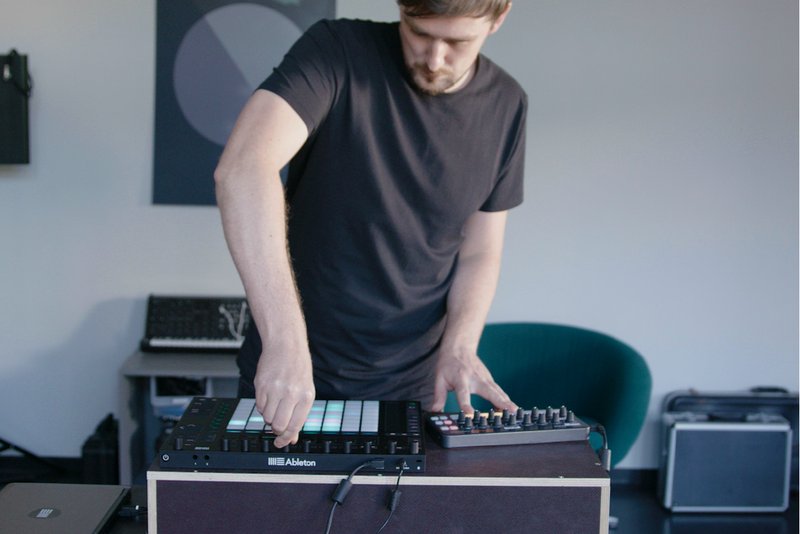 Droned-out ambience and densely layered field recordings, distorted beats and industrial-edged basslines – these are the cornerstones of the darkly immersive sound-world of Berlin-based artist Simon Hayes aka Swarm Intelligence. Over the course of two albums for Ad Noiseam, a 12" on Voitax called “The Lighthouse”, and an upcoming EP on the Instruments of Discipline label, Hayes has refined the Swarm Intelligence template to nearly weapons-grade precision. Equally meticulous in translating his studio productions into compelling performances, Hayes has earned a solid reputation for fearsome live sets that mix clattering beats, snarling, abrasive distortion and dissonant textures.

In the video below, Hayes shares a few highly useful techniques and strategies for performing on stage with Live and Push and striking a balance between reacting to the moment and recreating studio tracks.

The “techno button” Simon mentions in the above video is simply a toggle switch that sends one of two MIDI sequences to the same Drum Rack – download a simple demonstration Live Set of it here. Watch Swarm Intelligence put this and other techniques to devastating use in his Boiler Room Berlin performance:

And for some more close up views of Simon’s set up here’s Swarm Intelligence performing a live version of the track “Antenna”, filmed at the Ableton office:

Keep up with Swarm Intelligence on his website and Soundcloud