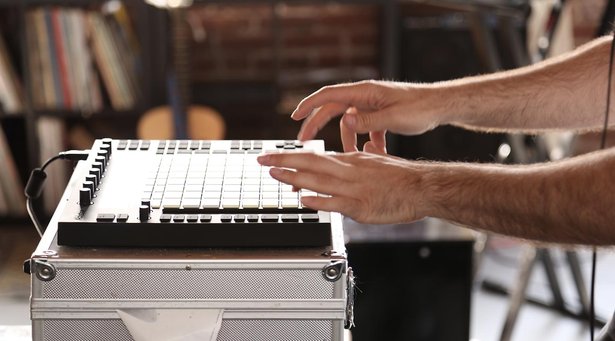 San Francisco-based hip-hop producer Decap debuts a virtuosic video for his new single “Feeling” this week. With Steadicam rolling, the veteran hip-hop producer performs the entirety of the track on Push in one take, using no quantization – all the sequencing, looping and soloing done without any sort of safety net.

Decap – an East Coast native making beats since he was 13, and whose credits include Talib Kweli, Smoke DZA, and Snoop Dogg – says Push has been pivotal for his burgeoning live career. In the following Q&A, Decap takes us inside the video recording process and his plans for 2015.

What are we watching in this video? It looks like you sequence the beats, then loop them and manipulate them, and solo on top of that, all without any quantization?

Nothing’s quantized. That was the goal, to play it without any mistakes and film it the whole way through. I was super-stoked. At first I was like, ‘Damn, that’s a lot of pressure,’ but it ended up being pretty easy and dope. I had the metronome at the beginning of the track in my headphones so I was able to keep time.

No quantization is tight – you can really let your own emotions and timing come out. There’s something rigid about quantization and anything I can do to just translate my true feeling of the track and have the listener feel it raw to the core, I want to be able to do that.

I came to L.A. a day and a half before the shoot and practiced it over and over and perfected it. We messed around with a couple different shots. Then I took a deep breath, meditated before the performance, and kind of did it in one take. It was awesome being in the moment and having that pressure to just kill it. It felt real good.

"No quantization is tight – you can really let your own emotions and timing come out."

What are we seeing technically? How are you using Push?

I have a Live 9.2 beta version which allows me to use all 64 pads for the performance, so I had all my core structures of the track laid out on the 64 pads, which I think really helps in a live setting. Before, a lot of drum machines had only 16 pads. Having the real high-quality Akai pads on both hands – I can really just expand. It took practice to be able to do what I did in the video, because now I’m thinking in terms of two hands at the same time. I’m a couple months into doing that and I’m just discovering what’s possible.

The solo sounds like you’re wailing on electric guitar, but you weren’t using the touch slider to adjust the pitch?

No, it was a knob at the top, the LFO mapped to a wah effect. I did use the [touch slider] but not until the end. That’s another reason why I love Push. It’s really expressive. It allows me to get funky with it. The solos were interesting because every single time I practiced it was different. So it stays true to the track name “Feeling”. I really want to be authentic in my expression and just play something that comes naturally to me in that moment. Some solos were real energetic, others were laid back. 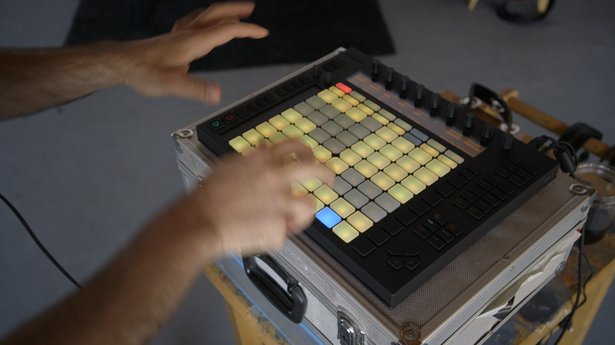 How did you get that sample choking that we see in the video?

So, I have this loop with long samples going that I recorded in the beginning of the performance. And then I have two pads, that have the sound turned down, but are in the same choke group as the playing samples, so I can choke them and create variations. It gives it that choppy, raw, hip-hop feel. Some of the greats that I admire like DJ Premier used that a lot in their tracks.

How’s 2015 shaping up for you? You’re set to release a new LP and you have live dates coming up?

There’s a Snoop track that was cut in 2014 and is not out yet, but is coming out this year. I’m just working on my album and also thinking about how to perform it. I was always the producer type shopping tracks to Talib, Snoop, and all these artists. Now, Push is helping me shift my identity. I’ve always wanted to be an artist and perform my own stuff. When Push came out I knew it was going to be in the studio, but I didn’t know how important it was going to be for performance. I didn’t even know how much performing was going to be a part of what I do and love. It’s amazing how nowadays producers can brand themselves as performing artists.