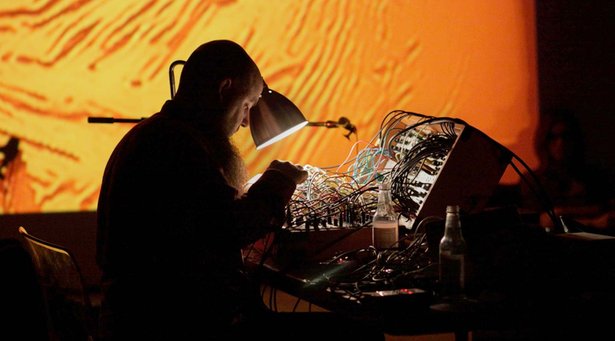 There’s a conspicuous amount of attention on the field of modular these days. While in the past modular systems were the mark of a specialist, they’ve now become an option pitched at the prosumer. But for those thinking of diving in, there are caveats that need exploring. Firsthand knowledge from an expert can help flesh out the realities, so for this part of our series on modular synthesis we got in touch with Keith Fullerton Whitman to hear his take on the pros and cons of going modular.

Whitman has worked with an encyclopedic range of software and hardware instruments, from Max/MSP to the oud. He was even granted access to the treasure trove of arcane devices housed in the Groupe de Recherches Musicales (GRM) studio, a sonic research center founded by music concrète pioneer Pierre Schaeffer that has seen the likes of Iannis Xenakis and Bernard Parmegiani pass through its doors.

An excerpt from Whitman’s “Rythmes Naturels,” composed in the GRM studio

Since the early 2000s Whitman’s name has become synonymous with modular; he is the sort of guy that boutique module manufacturers seek out to test their latest designs. He also provides a platform for obscure new experimental music via his distribution company Mimaroglu, and regularly dispatches audio oddities through imprints such as Editions Mego and PAN. So, while he is a modular convert, he approaches the scene with a grain of salt, and offers us an informative take on a field shrouded in hype and forum chatter.

There’s that cliché about people getting a modular and then becoming so lost in patches and processing that they stop finishing any music. What were your first interactions with the modular world like, and did you feel like you were falling down a rabbit hole?

The first rack I put together started when I went to Berlin in 1998 or 1999. The apartment in Mitte where I was staying was above a place that used to be a synth shop and only sold Doepfer modules. I’d get my döner kebab and stand in front of the window looking at this big synth and thinking: Wouldn’t this be easier than messing around with my laptop and Max? So I got an oscillator and a filter in a small suitcase. Then every six months I’d go back to Berlin and buy a couple more modules.

I got caught in that void of not really making music while I was learning the ins and outs of modular synthesis. It’s like building a jigsaw puzzle before you can appreciate the picture. I finished that rack in about 2001 or 2002, and then I started spending more time making music on that than the computer. You can stand at the modular and all it does is make sound. What a beautiful thing that is. No diversions, no Facebook, no email. That’s it. It only exists in its own world to make sound. There’s a morning like today, where I don’t want to face the world or get on the internet, so I turn on the modular and by the end of the day I’ll have five minutes of cool sounds.

It sounds like an ideal situation, yet the learning curve and financial barrier of getting into modular is hard to overcome.

It’s an insanely expensive hobby. It’s like restoring vintage cars. There are modules that cost thousands of dollars. Of course, the first person that gets the elusive expensive module wins that psychological game.

Also, the cultures running modular synth message boards – I can’t deal with that either. It’s really tough on me. I don’t go on there very much. I went to write something the other day, and I realized I hadn’t posted enough so I’d been booted out.

This might sound a bit romantic, but I feel that the physicality of a modular synthesizer provides a fresh way of understanding the flow of audio. You can see and interact with what modulating and processing actually are in a firsthand way.

Every jack, every chord and every knob has a function. It’s all there. For the most part, what you see is what you get. There are no presets with a modular, which is another really important thing. You have to know that’s where the signal comes out, and that’s where the control signal goes in and all that.

Modulars have a really imposing physical presence. You see somebody with a huge system and it connotes all these possibilities. There’s an infinite amount of ways you can bring signals in and out of other things. The fact that they all speak the same language is nice, having the same voltage ranges. You can’t really screw it up. You can’t break it by plugging an output into an output.

I’m coming from Max/MSP. If I’m in the middle of fixing a patch and I do something wrong, the whole thing crashes. You can’t really do that with modular. Sure you can plug a module in upside down and fry it, but once it’s set up and running you can’t go wrong. Some of the best sounds that I’ve made have been at two in the morning, half drunk; I’m trying to get a particular sound, then I miss the right jack and get some totally odd squealing noise and think: This is great, I wonder what’s going on here, and I’ve got an output plugged into another output. And they’re fighting each other. That kind of tactility, the way the voltage moves; it’s actually electrically happening in the cable. It’s not a stream of numbers, it’s voltage physically battling voltage. There’s definitely a pure physicality to it that is very attractive to some people.

Whitman performing live at the PAN ACT Festival in 2013

In the modular world it seems like there’s a lot of focus on the instrument itself rather than on what sort of music comes out of it.

Totally. A lot of this gear-heavy talk is a product of gear-heavy music. It’s not necessarily always a good thing. The best music always transcends technique and whatever system you’re using. I get a lot of people sending me demos while I’m traveling, and a lot of it sounds like “I just got a modular,” and they give me one hundred copies of a CD. That’s cool, but I busted my ass for 15 years before I even thought about putting out a record. It’s weird now that it’s sped up to the point where within a week of getting an instrument, you’re expected to know how it works and then do something substantive with it. So there’s just so much straight up noise out there. People don’t even figure out the basic idea of what a thing does before they start something with it.

I have more conversations about gear these days than I do about music, which is really strange. I don’t know what to attribute that to other than the fact that these instruments are relatively new, the discovery of them is new, they’re kind of shiny and interesting, and there’s a lot of personality imbued in them.

Find out more about Keith and his work over at his website.