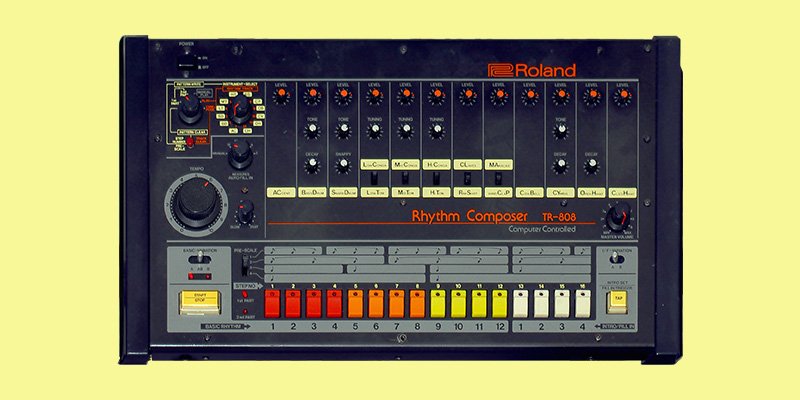 Listening to the radio in 1982 you’d hear the Roland TR-808’s synthetic percussion sounds on Marvin Gaye’s single “Sexual Healing” – the first big 808-based pop hit. Listen to the radio today and you’ll hear booming 808 bass on tracks by the likes of Beyoncé, The Weeknd, Travis Scott and Future. The fat sub bass sounds we now associate the 808 with are a world away from its original use as a programmable replacement for a live drummer.

The use of the 808 in pop music has followed an unusual trajectory. When Kanye West released his 808-based album, 808s and Heartbreak in 2008, the sound had a deliberately retro charm. What was state-of-the-art technology in the 80s was brought back as a piece of sonic nostalgia. Since then it has grown into its current status as the go-to bass sound of hip hop’s vanguard, sounding fresh all over again.

Only 12,000 Roland TR-808 units were ever made, so the vast majority of producers currently making 808-heavy beats have never laid their hands on the hardware itself. The boomy bass sounds we hear in so much contemporary hip hop and trap stem from the 808’s iconic bass drum sound with its unnaturally long decay. These samples, along with the instantly recognisable hi hat, clap, clave and snare sounds, are some of the most readily available and frequently downloaded sounds out there. We’ve collected some of our favorite tutorials for creating fat 808 basslines, from concept to mixing.

First up, Seri shares some tips for using compression and Simpler’s pitch envelope to get punchy and full 808 sounds without a kick.

In this next video, DECAP explores three different techniques for making your 808 basslines slide, glide and bend in Live.

Mixing overtone and harmonic-heavy 808s can be tricky. Guido from Catandbeats demystifies the process with some helpful mixing and sound design tips to get your 808s to cut through.

Keep up with Seri, DECAP, Fanu and Production Music Live.