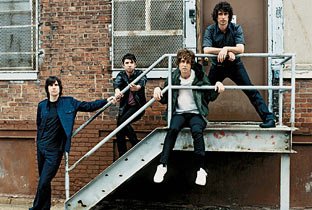 Few bands out of Brooklyn's "post-rock" underground have been able to instigate stylistic changes as radical as The Rapture's and survive--and not just survive, but flourish. Back in 1998, the band's core members were still living an unruly punk existence on the west coast when they tracked the thrash-driven Mirror EP and embarked on a grueling tour that eventually landed them in New York City. They soon hooked up with the DFA (Death From Above)--the production duo of James Murphy and Tim Goldsworthy--whose aggressive, alt-disco rock sound propelled The Rapture's first Sub Pop EP Out of the Races and Onto the Tracks and their major label debut Echoes into the stratosphere.

Gabriel Andruzzi joined The Rapture just months before sessions for Echoes began, bringing with him a well-rounded skill set on sax, synths and software. As the band's musical bent evolved from no-wave punk to funk-infused dance rock, so too did their reliance on electronics and computers. "We were all using recording software," Andruzzi recalls, "and [our next album] Pieces of the People We Love was done in Pro Tools and Logic. But it was when we discovered Ableton Live, which I'd actually known about for years, that things really opened up."

Live 6 has not only become The Rapture's main platform for remixes--standouts include treatments of Williams' "Piccadilly Circuits" for Berlin's Get Physical label and Greenskeepers' "Polo Club" for the San Francisco-based Om label--but the program is also serving multiple roles for the band as compositional tool, onstage hub and production suite. "The nice thing about Live 6," Andruzzi explains, "is that it's easy to pick up and use and accomplish certain tasks with, but the more you use it, the more you find out about it, and the more complex you realize it actually is. It does just about everything that I want it to do."

What's the coolest thing that you've discovered about Live so far?

Really the most attractive thing is its ease of use at manipulating audio, whether it's on the fly or just recombining it with other things slowly. I guess the whole elastic audio function of Live was immediately what drew me to it. Beyond that, it's just a fun program, with all the plug-ins and everything else that comes along with it.

How did you first get into it?

Right around the time Pieces of the People came out was when I first picked it up. A lot of my friends had used it, but I'd just never gotten around to it because there were other programs I was using. I was basically always waiting for a project or a reason to use Live. I probably first started on it when I was working with [bassist] Mattie [Safer] on some remixes with another friend, and he used it a lot. So that was my functional introduction to it.

How do you configure Live when you're playing shows?

We use it for a couple of different purposes. If I need to trigger samples from a keyboard, we have a click running out of Live to our drummer and bass player, so whatever I trigger will be in the right tempo. Sometimes we just use Sampler as a synth, but if a song is mostly electronic, we might use Live as the brain to send MIDI to a drum machine, a virtual synthesizer and another keyboard. There are also samples and stems--we use Live to run some stems from a recording, and also to trigger samples. It's definitely the workhorse for the song "First Gear," just to name one, and no doubt it will be for other songs too.

You mentioned the ease of manipulating audio--how about beats in general?

In making a beat, Impulse is great because it's really easy to manipulate any sound you import into it. I also like using Beat Repeat, and trying to find new ways of using that with samples. Often I'll take a drum sample--it could be just a simple part, like a shaker--and basically overlap it with itself, but by using different filters or EQ plug-ins, I'll create a new pattern out of that. Then I send that to a bus and manipulate it with Beat Repeat to come up with something completely unlike what I've put in. Sometimes it works out wonderfully; that's just the nature of experimentation.

It's also really cool that you can easily record an arpeggiated line that you're running on Operator into an audio track, or record that into a MIDI track and then manipulate the MIDI notes from something you recorded with the Arpeggiator. Those are seamless little tricks that you can use all the time.

Do you think Live will figure in the making of your next album?

I think it definitely is already. Everybody in the band has it. We each have a different level of proficiency, but we're able to sketch out ideas and songs, so it's been really helpful on the road as far as that goes. I've even been remixing some of our unreleased songs a little bit--not extensively, but just using different plug-ins to get different sounds out of things. For us, I think it's definitely gonna be an important part of us creating music in the future--as well as right now.

For more information, check out www.therapturemusic.com

Monolake: Ghosts in the Machine